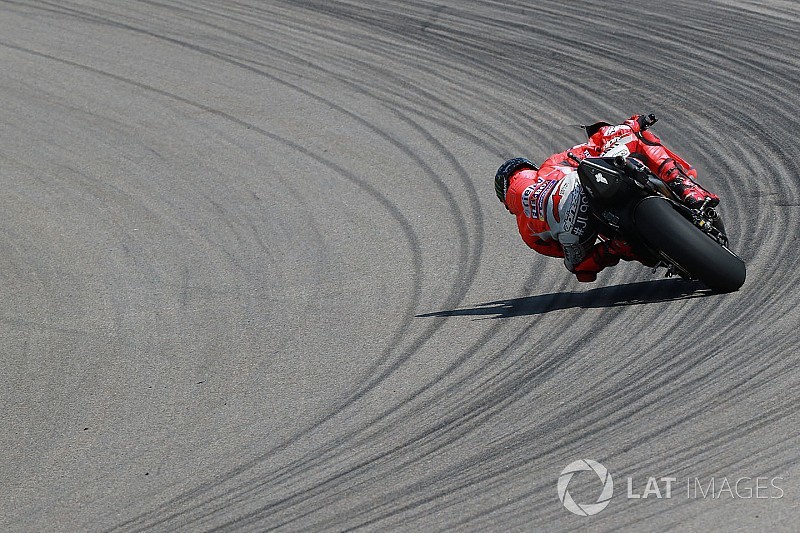 Cal Crutchlow claims the Ducati has become the strongest MotoGP bike at turning after the three GP18s finished Friday's running at the Sachsenring in the top four.

However, Jorge Lorenzo ended up setting the pace on the Friday of the event's 2018 edition, with Danilo Petrucci and Dovizioso taking second and fourth places respectively.

"It is the best turning bike on the grid, simple as that," said LCR Honda rider Crutchlow, who ended the day ninth-fastest, about the Ducati Desmosedici.

"It is a tiny twisty circuit, they can accelerate very well out of this last corner over this crest. But it is the best turning bike, that's for sure."

Marquez added that the Ducatis have improved a lot at the German track, while the Honda has lost some of its usual advantage.

"Especially Ducati is the manufacturer that improves more on this racetrack," said the Spaniard. "It’s what I said a few races ago: Ducati is strong everywhere."

However both Ducati factory riders downplayed their chances with Dovizioso insisting turning, as well as tyre wear, continue to make like difficult.

"Still our turning, especially when the tyre drops, is not easy, is very difficult to turn fast enough," explained the Italian. "But the base is a bit better, so we are able to make a good laptime.

"But the point is, we have to be fast here, and you can't use the best potential of the tyre because you can't finish the race.

"So that is difficult because you can't entry and exit with full power or you can't open where you want. You have to reduce the power, wait to open throttle and you have to do the laptime."

Lorenzo reckoned the bike is not that much stronger than it was last year at the Sachsenring.

"Looking at the results of today, we are in first position with great speed for one or two laps," he said. "We can say that the bike has improved a lot, no?

"But also for example [Alvaro] Bautista and [Jack] Miller with the old bike [the GP17] have been faster, quite close to our laptimes so probably we didn't improve that much that we think.

"Anyway, we have to see the race. Probably our bike for consistency can be a little bit better because we have in theory more turnability in the corners.

"But yes, in a such a close championship, smaller steps are very important."