Andrea Dovizioso believes the Ducati MotoGP team would be “stupid” to not sound out Marc Marquez for a possible switch to the Italian manufacturer in 2021.

Earlier this year, Marquez concluded a new contract with his Honda team running to the end of the 2020 season, but the Spaniard is likely to be at the centre of rider market speculation for 2021.

Indeed, there have been reports the Italian media that Ducati has already made tentative contact with Marquez’s entourage about a possible switch that year, although this was denied by team manager Davide Tardozzi.

Asked for his take on the rumours, Dovizioso said he would be surprised if Ducati was already thinking so far ahead – but added that the Bologna marque should approach Marquez in due course.

“It’s normal this is the case,” said Dovizioso. “I would be worried if it wasn’t, because I think it’s normal.

“I know there were rumours that Ducati has already made an approach, but I don’t think this is the case, because it wouldn’t be smart on their part. We have still two years ahead of us together and clear objectives.

“I think that everyone is focused on this, but then it’s logical that if there is this possibility, they will always move in good time.

Dovizioso himself is likewise committed to Ducati until the end of 2020, but the 32-year-old says he would have no problem going up against Marquez in the same team.

“It would be a good thing [to be teammates with Marquez,” added Dovizioso, who came close to joining Marquez at Honda in 2017 when Dani Pedrosa was being linked to a Yamaha move.

“When you are alongside a champion, as I am now with [Jorge] Lorenzo, you always learn something, regardless of your relationship with them.

“Every champion has his own characteristics and it would be a great thing to be able to have the data in your hands and understand what he does.

“When you study an opponent who rides a different bike, certain details you can’t see. So it would be very interesting.” 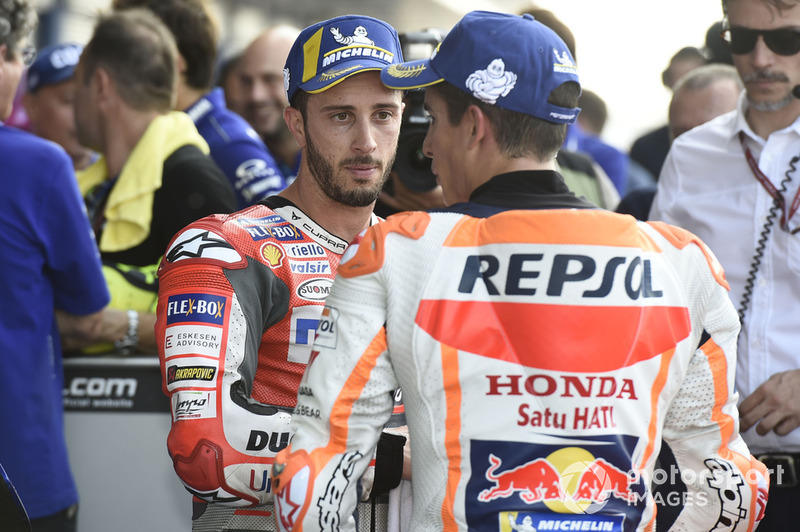