Ducati Team arrives in Japan for penultimate MotoGP round

Having completed the Malaysian and Australian Grand Prix rounds over the course of the past two weeks, the Ducati Team now prepares to face the Japanese Grand Prix, which serves as the final leg of a taxing overseas tripleheader and the penultimate round of the MotoGP World Championship.

Twin Ring Motegi, which has hosted a World Championship race since 1999 (the event was called the Pacific Grand Prix from 2000 to 2003), is known for its unusual layout that sees a number of long, fast straightaways immediately followed by tight corners, putting a premium on a bike’s braking and acceleration performance.

In the past, the Ducati Team has earned four Motegi victories at the hands of Loris Capirossi and Casey Stoner, with the latter having clinched his first world crown at the circuit in 2007. Andrea Dovizioso likes the circuit and has finished on the Motegi podium in all three classes (including a victory in the ’04 125cc GP), whereas Nicky Hayden doesn’t count the Japanese circuit among his favourites. 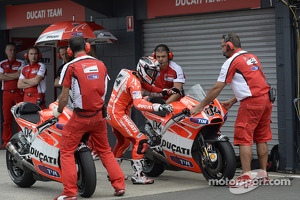 Andrea Dovizioso – Ducati Team
“Motegi is a track that I like, but we’ll have to see what the temperature is like there. It seems that it might be colder than usual, and I think our bike could go a bit better there than it did in Malaysia and Australia. I really hope so because we must reduce the gap to the leaders. As for my MotoGP results, I’ve had a runner-up finish at Motegi, as well as my only pole position.”

Nicky Hayden – Ducati Team
“This is a special race. There’s a lot of tradition and history in Japan and the fans there are great, which makes it a lot of fun. It hasn’t been a great track for me, and in fact I’ve struggled a lot there, so it will be tough. Because of the stop-and-go layout, the bikes tend to wheelie, and I’ve struggled to take advantage of the Ducati’s power.”

Vittoriano Guareschi – Team Manager
“Motegi is an unusual track in terms of both the bike settings and the stress that the brakes undergo. The setup that we use will have to be quite different from what we used at Phillip Island, where the track has long, fast corners, compared to the stop-and-go layout at Motegi. It will be important to find a setup that lets us have good acceleration, as that can make the difference at a track like Motegi. There could be a possibility of rain or cold, so we’ll try to be ready for anything.”

Sebring: Round one GT race results