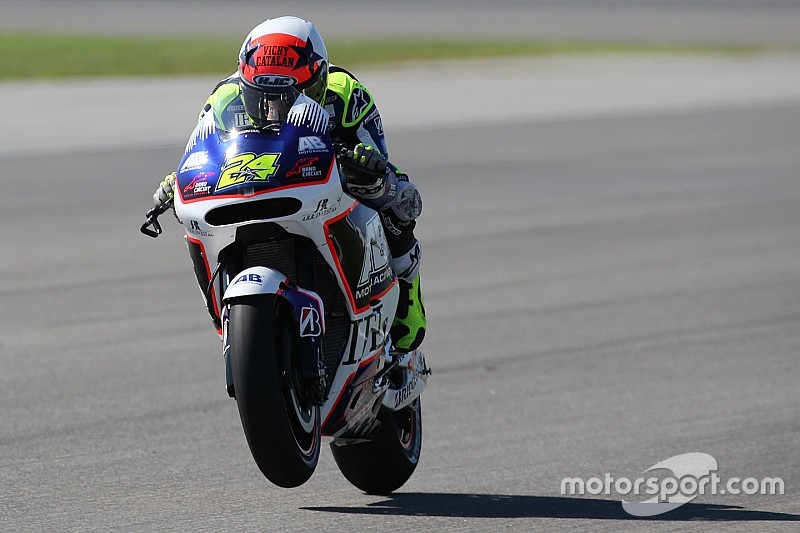 MotoGP veteran Toni Elias will contest the five remaining Grands Prix of the 2015 MotoGP season with Forward Racing as he replaces Claudio Corti.

Elias, 32, scored a MotoGP win in the 2006 Portuguese Grand Prix with Honda and has five other premier class podiums to his name.

Having stepped down to Moto2 in 2010 for a title-winning campaign, he has been on and off in MotoGP since then and has most recently contested this year's Indianapolis race as an AB Motoracing replacement rider.

"I can’t be happier to be back racing in MotoGP," Elias said. "I wish to thank Giovanni [Cuzari, Forward boss] and the whole team for this great opportunity. The goal is to work hard and enjoy the ride: the results will come. I am very motivated and enthusiastic."

Forward has endured a turbulent 2015 season in MotoGP, the Yamaha customer team forced to skip Indianapolis when Cuzari was arrested by Swiss officials on corruption and fraud charges.

The events have seen Stefan Bradl terminate his contract with the team and the German was replaced by Corti, who now makes way for Elias after recording a best finish of 18th in the last three races.

"We are delighted to welcome Toni Elias to our team for the rest of the season, with five races to go, two of which are in Spain," Cuzari said.

"We are proud to have a former World Champion riding the Yamaha Forward for the remaining 5 races.

"Special thanks to Claudio, who has always been close to Forward Racing, and has stayed with us in the past few races putting himself fully at the team's disposal."

In spite of the turmoil, Forward have enjoyed an extremely successful San Marino Grand Prix, with the team's main rider Loris Baz making the best of mixed conditions to claim a fourth-place finish.