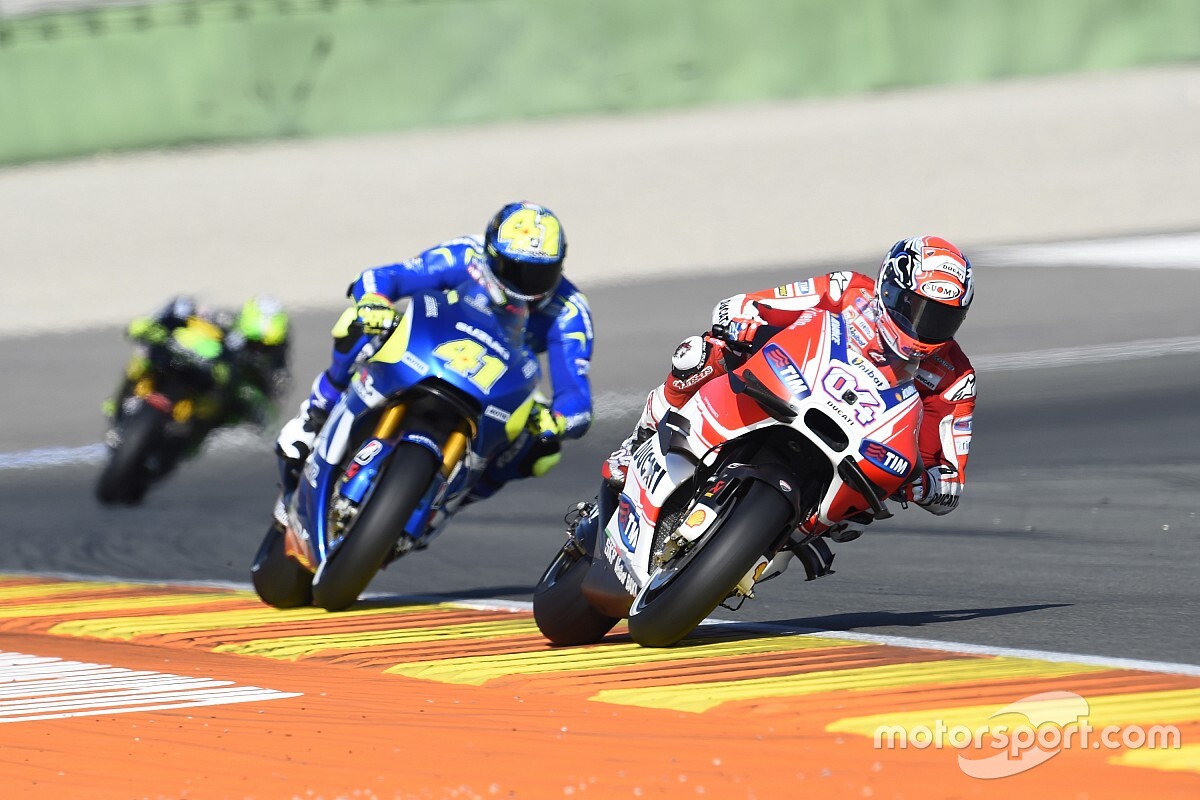 Aleix Espargaro has revealed a deal to join Ducati for the 2015 MotoGP season was “practically done”, before it ultimately retained Andrea Dovizioso.

Espargaro made his full-time MotoGP debut in 2010 with Pramac Ducati, before returning in 2012 with the Aspar team on its Aprilia-derived CRT machine in 2012.

He moved to the Forward Racing Yamaha team for 2014, where he managed a podium in a wet Aragon Grand Prix, and eventually signed with Suzuki to spearhead the Japanese marque’s return to the series in 2015.

However, in the Spanish MotoGP podcast, Espargaro revealed he had “shaken hands” with Ducati General Manager Gigi Dall’Igna “three weeks before” agreeing to join Suzuki to ride for the Italian marque.

However, such a move would have rested on Dovizioso choosing to join Suzuki at a time the Hamamatsu marque showed great interest in the Italian, instead of staying put at Ducati.

“In the end, everything goes as it goes,” Espargaro said. “I had a very unstructured sports career at the beginning and when I came to MotoGP, I have always shown that I am a very hard-working rider.

“When I signed after the year with Forward Racing [2014], when I achieved seventh in the world championship with the Open bike, I signed with Suzuki.

“But I had shaken hands with Gigi Dall'Igna three weeks before to go to Ducati, it was practically all done, and in that time Dovizioso ended up staying [instead of going to Suzuki].”

Espargaro managed to finish 11th overall in 2015 on a woefully underpowered Suzuki GSX-RR, scoring pole position in Barcelona, but struggled with the switch from Bridgestone rubber to Michelin the following year.

He lost his place at Suzuki at the end of the year to Ducati outcast Andrea Iannone, moving to Aprilia for 2017 where he has remained since.

“So I went to Suzuki,” he added. “At that time, I had the opportunity to be in two of the most powerful factories in the championship and ended up in Suzuki.

“I had a good year with Suzuki and the second year the reality is that the change of tyres from Bridgestone to Michelin cost me a lot, but it is not an excuse, I was not up to it: Maverick [Vinales] won a grand prix [at Silverstone], he was much more competitive than me.

“I think I didn't have a bad year because I did a lot of top five and top six results, but I was not at Maverick's level, that's the reality.”