Espargaro: Aprilia has to improve bike to keep me 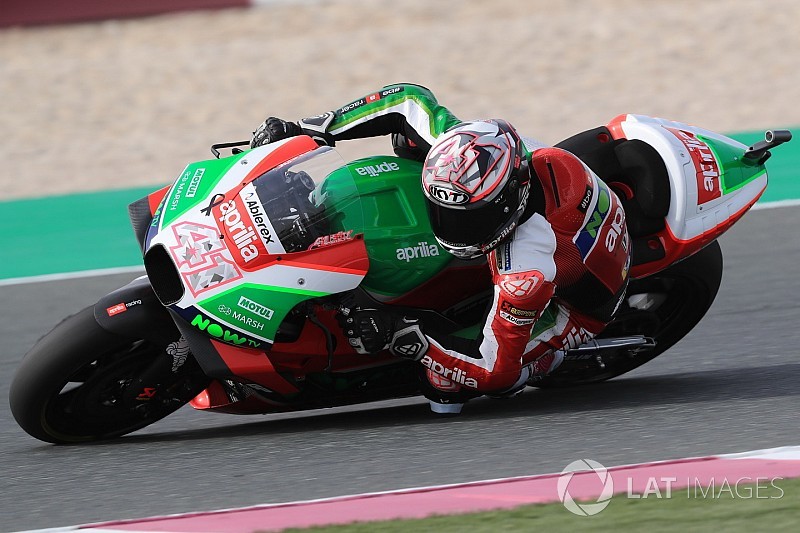 Aleix Espargaro says Aprilia has to improve its MotoGP bike to keep him past the end of his current contract.

Espargaro, who kicked off his eighth campaign in the premier class with a lowly 19th place finish in Qatar, joined Aprilia in 2017 from Suzuki on a deal that runs to the end of this season.

Several riders on the MotoGP grid have already firmed up their post-2018 plans, but Espargaro admits his negotiations with Aprilia are still in the early stages.

“I'm not Valentino [Rossi] and I know that,” Espargaro said in Qatar. “I think I have gained respect for developing motorcycles.

“I am not a rider who is in the pool of championship contenders, but I work more than anyone and I need that to be valued. I would like to continue at Aprilia but for now we are still far away [from the top].”

Espargaro admitted he was “very frustrated” in the off-season before the introduction of Aprilia's new engine – but said that, while “not a revolution”, the upgraded motor was something that “helps you want to continue”.

“I think I'm in the best moment of my career, I'm looking ahead to be fighting for podiums, but the bike has to go along with this.”

Espargaro was challenging for the top 10 in Qatar until the final lap, when fuel troubles dropped him out of the points.

“In lap four unfortunately the [dashboard] light of the bike started to advise me that we were running out of fuel," he explained.

“I decide to switch to map three, the most, let's say, slow map to try to consume as minimum as possible. But even like this was not enough.

“I give everything on the race. I was very slow, trying to save fuel at maximum and trying to not rev the bike, but even like this I was very competitive.

“And I arrive to [Andrea] Iannone and [Jack] Miller to fight for ninth place, but the bike have the fuel problem.

“If I was able to use the map I use yesterday in qualifying, I'm pretty sure I was able to fight for top six, because the pace we did in the second part of the race, as always in the race, was very competitive.”

While Espargaro left Qatar “super confident” about Aprilia's prospects, teammate Scott Redding – who struggled for pace and eventually made up the top 20 on his debut with the team – stressed the team had to understand the bike's rear grip issues.

“This weekend was just zero grip, and with this bike when you have no grip in the rear you cannot stop it,” Redding said.

“Aleix has the same comment. We have no rear grip, no rear grip whatsoever. We need to understand why, I don't know why.”

Marquez and Pedrosa to test at Jerez on Monday