Espargaro: Sachsenring the first race of 2019 I enjoyed 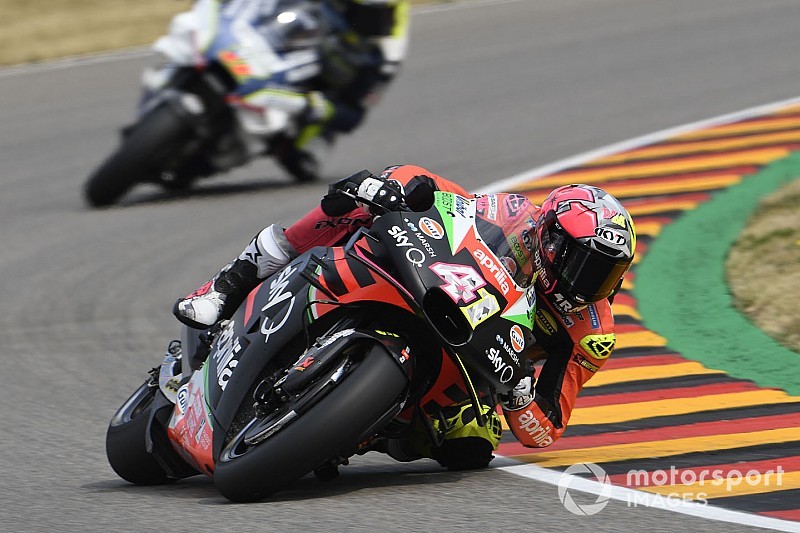 Aleix Espargaro says the German Grand Prix was the first race of the season he could enjoy and that Aprilia was finally where it is supposed to be, fighting inside the top 10.

Espargaro had been set to finish inside the top 10 at the Sachsenring for the first time since March's Argentina race as he was running ninth, at the back of the group fighting for fourth.

While he eventually crashed out with two laps remaining, Espargaro was pleased with the performance of his Aprilia RS-GP after a largely forgettable first part of the campaign.

"I am happy because I enjoy a lot the race, the first race this year that I enjoy, fighting with the top guys," said Espargaro, who goes into the summer break 14th in the standings.

"I did a good start, then I had no grip all race, really poor grip on the rear but I was very strong on the brakes so I gained a lot there.

"Then I was very comfortable behind Vale [Rossi] and when he overtook [Franco] Morbidelli, Morbidelli slowed a lot the pace and I was not able to overtake so I get a little bit nervous.

"When I was able to overtake him it was a 1.5-second gap, I try to close the gap to Vale and I lose the front.

"Sometimes you need to understand where is the limit and today the limit was ninth place, already [I] was maybe over the limit.

"I feel good for the first time this season, I try to go with the group, I knew that they were fighting for fourth place.

"It was quite dangerous riders in that group so I was respecting a little bit the party there and gain some position but unfortunately I was too much optimistic."

Espargaro added that fighting for positions inside the top 10 is where Aprilia is supposed to be, and that his crash was down to him risking too much to get an even better result.

"This type of track is very important to be aggressive and strong and is not a long track, the engine is not super important so I did a good race," he said.

"Sometimes you crash and you are angry. This time we are not fighting for the titles so I give my best to try to finish in the top eight and when you try to go over the limit you can crash.

"Today we were in the same group of fourth position, with the factory Ducatis, Yamaha and I am sincerely satisfied with the race.

"This has been the first race we've been in the place that I think we have to be, fighting for 6th-10th place, close to the second group.

"It's race nine [of the season] and has been the first time that we are in this position."

Ducati must "completely" focus on turning, not fighting Marquez