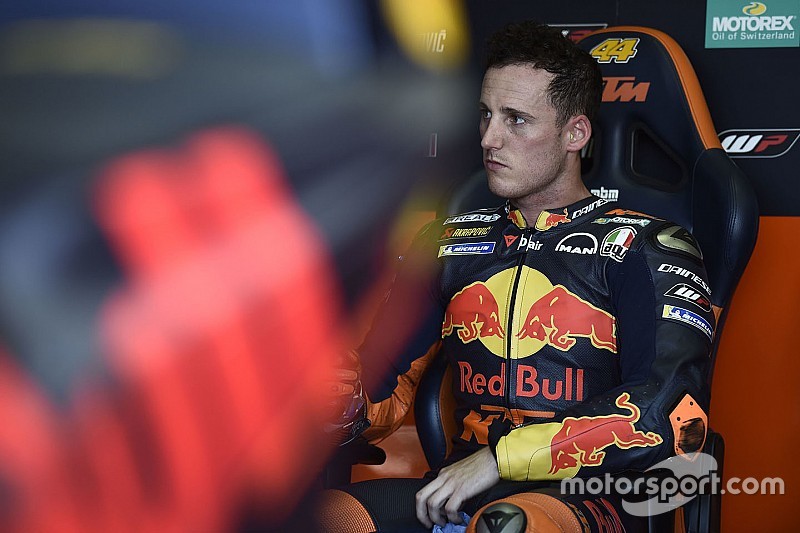 Pol Espargaro could not feel his arms or legs in the immediate aftermath of the crash that ruled him out of last weekend's Brno MotoGP race, according to his brother Aleix.

KTM rider Espargaro broke his collarbone in his warm-up crash at the Czech circuit, and was transported to hospital in Barcelona - although he did not require surgery on the injury.

He remains under observation and will miss this weekend's Austrian Grand Prix at the Red Bull Ring as he recovers.

Speaking to media in Austria, his brother Aleix revealed more details about Pol's condition, having visited him in hospital prior to travelling to Spielberg.

"Actually it was worse than what it looked like, because he had the spinal cord very inflamed," said the Aprilia rider. "On Tuesday afternoon he couldn’t touch anything with his hands.

"He said he was very worried before he arrived in hospital with [Dr. Angel] Charte. He couldn’t feel his arms or legs, nothing.

He added: "It was quite scary. Yesterday we talked to the neurosurgeons, they told us he was very lucky.

"Pol the first two days [in hospital] was very worried, had a lot of pain. I've never seen him that convinced to rest. He’s not thinking about the race, because he was very worried.

"Yesterday night was the first time he could start to touch things with his fingers. The first thing he touched was [Aleix's baby son] Max, I go with him there and he was touching him for the first time and he started to feel better."

Espargaro added it was unclear currently how much longer his brother will need to recover from his injuries before he can return to the race track.

"The doctors say to us they don’t have a lot of information how the spinal cord will improve or not. They say in two or three days it can be completely perfect, or it can be a very long [recovery].

"So we have to wait, it’s very dangerous that he move or he race or whatever before it’s completely no inflammation."

KTM will field just a sole bike for Bradley Smith in Austria with Espargaro out of action, as test rider Mika Kallio is also on the sidelines after damaging his knee in a crash at the Sachsenring last month.