Aleix Espargaro says his Aprilia team should have adopted a riskier strategy in MotoGP's Czech Grand Prix, as he felt that fighting so low down the order was "pointless". 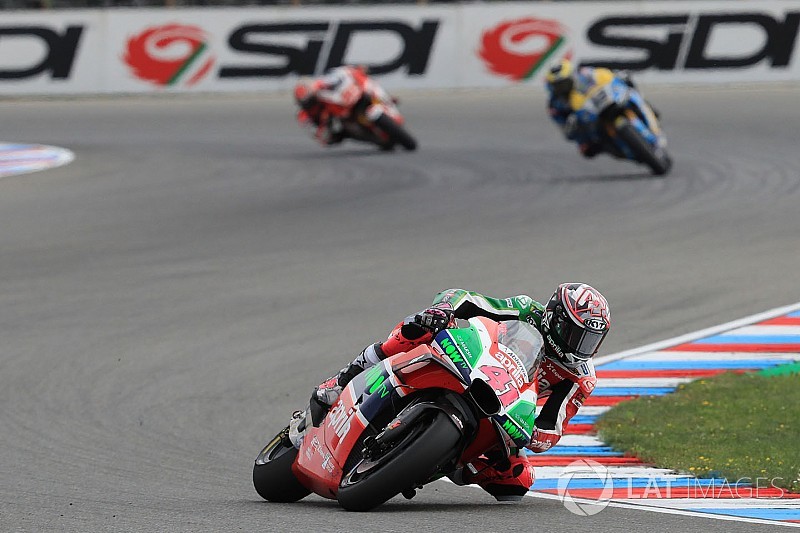 Espargaro, still not fully recovered from his injuries at the Sachsenring, scored one point at Brno after taking 15th.

The Spaniard was "pissed off" after the race, feeling it was "impossible" to go faster, but also criticised Aprilia for choosing a conservative strategy for the race.

Espargaro ended up using hard tyres to ensure he could complete the race without tyre wear issues, but he referenced Nieto Ducati rider Alvaro Bautista, who gambled on a soft rear tyre and finished ninth.

"With a hard rear tyre we didn't have any grip, this morning I felt really bad already in the warm-up and I felt I was, till the last moment, doubting to choose the soft rear option," said Espargaro.

"But at the end the team decided to go to the safe way to go on the hard-hard option and finish the race. Sincerely, from my point of view, it is no meaning to finish the race 15th or 14th.

"I am with respect for everybody, but I am not happy finishing this position, I can't understand what is the point of finishing 15th or 14th place or 25 seconds from the leader.

"I think it is better to take the risk, this is what for example what Bautista did in the last moment in the grid and he did a very solid race."

Espargaro said he had "no explanation" for Aprilia's current struggles, having also suffered a blown engine in qualifying.

"I am really pissed off, sincerely. I can't go faster, it is impossible, the bike is not turning when I release the front brake.

"No clear explanation of what is going on. We are not fast, I am trying everything I can but if you push more, it is just a crash, all the time.

"The bike is not turning when we release the front brake, no turning, no turning, struggling and no grip on the rear, look like if we were running with a three-steps harder tyres than last year.

"I can't risk, I can't go faster, if I try to go faster I just get a crash so it is very difficult.

"I don't know what is exactly the problem, tomorrow [in the test] we have an important day because we can try to change a little bit the situation but sincerely I have no clear idea."

Vinales withdraws from Brno test due to shoulder pain