Espargaro fit to ride at Brno after Sachsenring crash 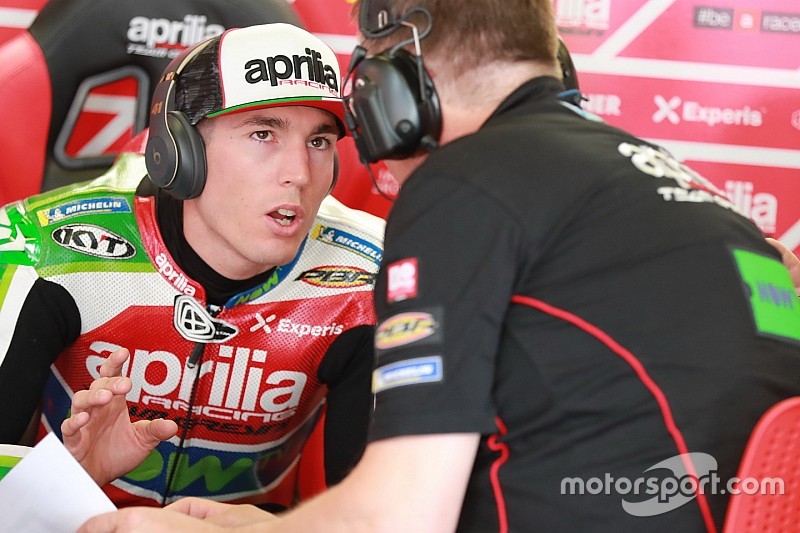 Aprilia MotoGP rider Aleix Espargaro is fit to participate in the Czech Republic Grand Prix weekend at Brno, as he has recovered sufficiently from his monster crash at the Sachsenring.

Espargaro sat out the German GP after hitting the air fence at speed in morning warm-up and sustaining “a bad thoracic trauma in the left rib area” as a result.

The Spaniard spent five days in the local hospital in Chemnitz after the accident, but was confident of riding at Brno, his chances aided by the three-week layover between that preceded the Czech race.

And having now gotten the nod from medical staff at the circuit, Espargaro will be back aboard his RS-GP in the first practice on Friday.

“Feeling good, I'm happy that I can be here, because it was a big crash,” Espargaro said.

“Finally the injury wasn’t as big as they [the doctors] expected at the beginning in Germany.

"They were too careful, really careful, not like in Spain. I think they're better than us but maybe this time was too much.

“Anyway I’m glad to feel good and be back in action.”

Espargaro admitted that the hospital stay had been a challenging ordeal, as it took up a noticeable chunk of his summer break and forced him to spend time away from his newborn twins.

“Has been one of the most difficult weeks of my life. My wife decided to come stay with me, we were far from the kids, they are just five weeks [old], was very very hard.

“Actually in Germany they [the hospital] didn't allow me to leave until next Monday, but I was completely mad, so I decided to organise, come back with a medical plan, because [it] was hard to stay there.”

With Sachsenring now expected to remain on the calendar next year after all, Espargaro hopes the track will make safety improvements in time for the 2019 round.

“I was very lucky. I think [I] was less than a metre [from missing the air fence].

“It was uphill - crashing in an uphill [turn] and arriving into the wall is very strange, means that it's very close.

“So for sure for the next year they have to put more air fence, but also try to think about how close the walls are.”