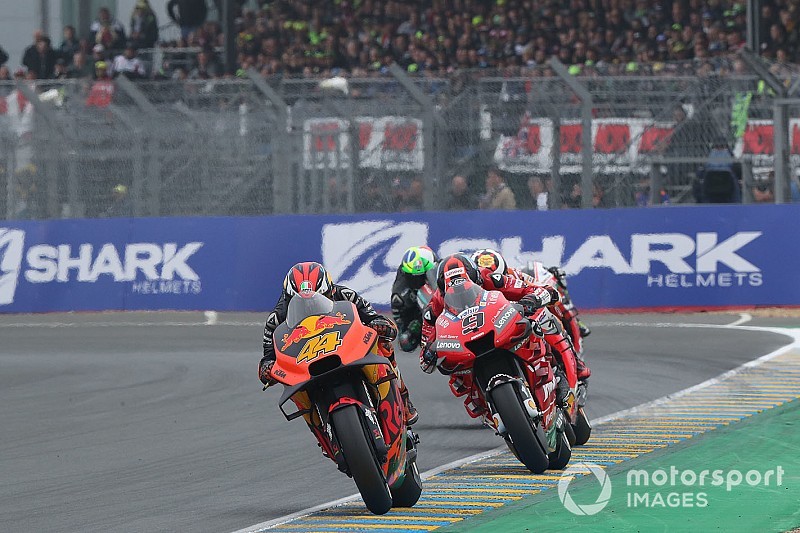 Espargaro secured KTM's best MotoGP result in a dry race both in terms of position and in terms of the gap to the winning rider, having already taken the RC16's first podium in the wet at Valencia last year.

This Sunday's race capped off an impressive Le Mans weekend by the Spaniard, where he was in the top 10 in every practice and climbed to as high as third place in the dry warm-up.

Espargaro, who spent the grand prix racing the Yamahas of Valentino Rossi and Franco Morbidelli, said that he had to be on the limit in every lap to achieve this "unbelievable" result.

"From FP1 [we were] fighting against these guys and around these guys," said Espargaro. "They just have good bikes and if we are able to make a good bike, a good KTM, we can be fighting with them and beating them as we have done today.

"Just five seconds off an HRC Honda after less than two years and a half, this is unbelievable. This means we have a good package, they are not unbeatable.

"When I was doing [1m]32.9-32.8s, I felt I couldn't continue doing that because I was so on the limit and especially in the first corner I had big lockings with 300 kph.

"Also I had some arm pump from moving the bike from one side to the other because I was simply on the limit, every lap.

"But I could do it, it means the bike can do it and even on the limit you can still continue doing it. I am so pleased with that."

Compared to the Yamahas he was fighting, Espargaro said the KTM was better in acceleration and braking, but losing out on corner sped.

"Franco was fast, also was trying to overtake me but I was defending my position because I think I was faster than him.

"Our stop and go was faster than Yamaha and also in some corners our acceleration was a little bit better because our corner speed was lower so they were catching me in that place, in corner seven like [Danilo] Petrucci [earlier in the race].

"It was the only way they could overtake me, by corner speed. That is why they went all inside like crazy trying to overtake me but I was trying to lock it because after I think I was faster than them.

Miller admits he "got carried away" battling Marquez