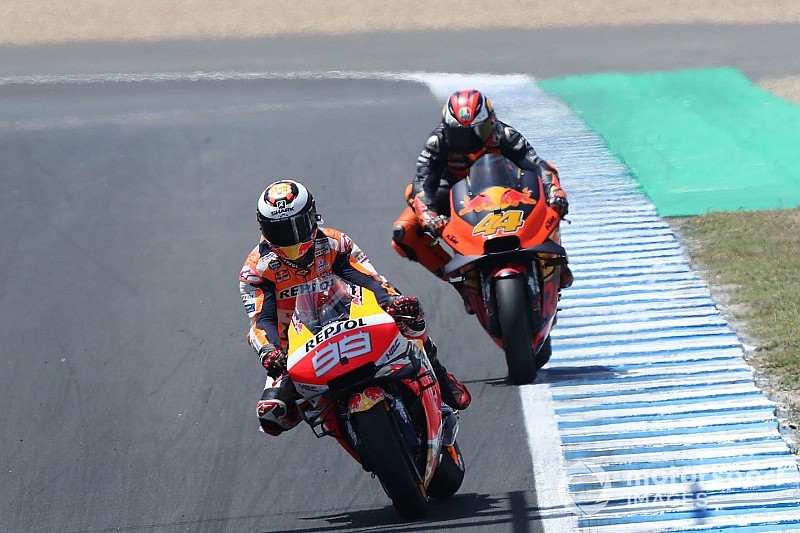 KTM MotoGP rider Pol Espargaro has revealed that he lost position to Jorge Lorenzo at the end of the Spanish Grand Prix at Jerez because he had misread his pitboard.

Espargaro reeled in and passed three-time champion Lorenzo towards the end of the race, and looked set to finish 12th ahead of the Honda rider.

But having lost track of the laps remaining in the race, he slowed up one lap too early and slipped back behind Lorenzo, before picking up his pace and preventing a further loss of position.

“I was pushing a lot at the end of the race, on my limits, front and rear, to catch Jorge,” Espargaro recalled. “I catch Jorge, I read in the board, it was my mistake, instead of 'three laps remaining' I read 'two laps remaining'.

“And then I went really close to Jorge, I overtook him, I did one lap in front of Jorge thinking that it was the last lap.

“I was so focused, checking all the sectors, locking the door because Jorge, with the HRC Honda, for him would be easy to overtake me back.

“I was closing everything and I was so stressed with riding the bike on the limit that I didn't realise it was not the last lap.

“I lost 2.5 [seconds] in [the first sector]. I should say that I had a problem with the bike, if I would be another rider, but no, honestly, this was my mistake.

“It looks like this is because I was not focused, but it's the opposite, I was so focused, so on the limit.”

Espargaro admitted he felt aggrieved by his error after the race, especially as he'd cost himself a chance to finish ahead of the factory Honda.

“For sure it was 100 percent my mistake. But in that moment so stressful, fighting against HRC Honda, it's not something normal, and I needed to be so on the limit that I did a mistake, and I was super-angry with myself.

“Just sorry with the team because we could take one more point, but I'm more angry because it was Jorge, HRC Honda, fight against them and beat them for once, it would feel good.”

The KTM rider felt that securing 12th would've been the best possible outcome in the race.

“If I would finish without this mistake, I would be around 10 seconds in front of my teammate [Johann Zarco].

“We are giving 200 percent, for sure we are looking for more but I feel that I'm on the limit of the bike and my package.”