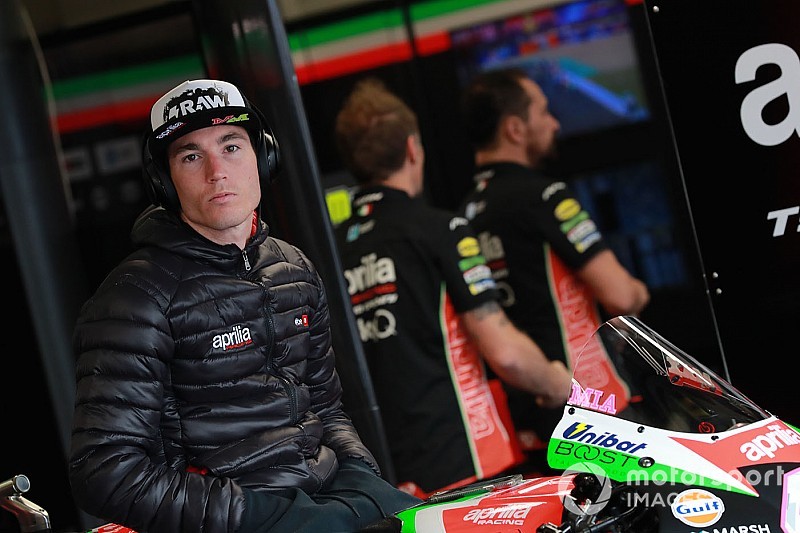 Aprilia rider Aleix Espargaro has expressed his anger regarding his collision with Jack Miller in the closing stages of the last weekend's Jerez MotoGP race.

Espargaro and Miller clashed at the final corner of the circuit while battling for 10th place on the 23rd lap of the 25-lap Spanish Grand Prix.

The Spaniard had dived down the inside of Miller and looked to have taken the position, only for the Pramac rider to attempt to reclaim the inside line further into the hairpin-like Turn 13 left-hander.

Miller's Ducati collided with Espargaro's Aprilia as a result, taking the former out of the race on the spot and causing Espargaro to lose a place to Stefan Bradl.

Espargaro, who nursed the RS-GP home in 11th, said he was irked by the collision but felt fortunate to stay on the bike.

“He opened the gas, or I don't know what he did there, I was still on the brakes, and he hit me very, very hard.

“I'm very angry because I think I could fight with [Takaaki] Nakagami for ninth place, also with Cal [Crutchlow] for eighth place maybe because we were there - and then Stefan overtook me.

“So, very angry because top 10 is important for me, but at the end lucky because I didn't crash.”

While Miller himself appeared angry after the crash as he gesticulated from the side of the track, the Aussie latter accepted that the crash was “mostly my fault”.

Miller had run as high as eighth in the early stages of the race, before his tyres dropped off.

“It's never nice to do 23 laps and not finish the race,” Miller said. “We had a good race going until about five laps to the end, seems to be Crutchlow started having a few moments, I felt I had more speed, I tried to pass one time, ran a little wide, and since that moment I was starting to struggle more and more.

"I got passed by Nakagami, [Valentino] Rossi and Aleix - Aleix passed me and ran just a little bit wide, I tried to hold a tighter line and come back, but didn't work.

“Mostly it was my fault, just literally hit a wall [with the tyres] - threw out the anchor, started fighting and, yeah, when you start going backwards like that, people are just firing it at you left, right and centre.

“He [Espargaro] was trying to pass me, ran a little wide - I mean, I'm only human, I'm going to try to hold my inside line and go around the inside. This time it didn't work, so back to the drawing board.”