Nicky Hayden and Andrea Dovizioso, made the best of the 75 minutes available for qualifying.

After a day and a half of delays due to poor visibility and dreadful weather conditions, track action at the Twin Ring Motegi circuit finally got underway early this afternoon with a single, extended wet qualifying session for tomorrow’s Japanese Grand Prix, the penultimate round of the 2013 MotoGP Championship.

Both Ducati Team riders, Nicky Hayden and Andrea Dovizioso, made the best of the 75 minutes available for qualifying, the American in particular showing superb wet-weather prowess to head up the timesheets on two separate occasions during the session. He eventually ended up third, equalling Dovizioso’s best qualifying performances of the year at Le Mans and Mugello.

The Italian took a bit more time to find his rhythm on the drying track, but he gradually moved into sixth position near the end of the session. Afterward, Dovizioso expressed satisfaction with his performance, which put him on the second row for tomorrow’s GP.

With a relatively rain-free forecast for Sunday, the schedule now has a 50 minute free practice session in the morning and a race start at the normal 2 p.m. time slot. 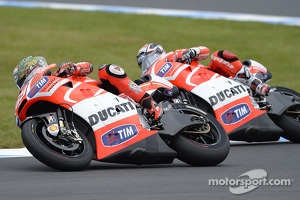 Nicky Hayden - Ducati Team, 3rd (1:54.539)
“We know our GP13 works well in the wet, and it’s nice to be on the front row here in Japan. If I’m honest, I’m a bit disappointed because at times in the session I was very fast and really had good feeling; I thought even pole position was a possibility, but in the last part of the session, the other guys really stepped it up, and as the track dried out, I wasn’t able to improve. Maybe I should’ve put on a new front tyre for the last exit, but it’s nice to be able to smile, and the important thing is to try to take advantage of the front row in the race. We know it’s going to be much more difficult if it’s dry, but I’ll try to get a good start and put up a fight for as long as I can. Thanks to the team for being pros and continuing to give me their best.”

Andrea Dovizioso - Ducati Team, 9th (1:55.036)
“It was sort of a strange qualifying session. The grip was very good but I had no feeling in the beginning, partly because I wasn’t really focused after a day and a half with no action, and in part because the setup wasn’t right initially. Fortunately, we had an hour and a quarter, so we were able to make changes and the bike improved a lot. Then the track began to dry and everything got easier. I’m pleased with my last lap, even though I found my rhythm a bit too late. Still, I did my best lap by myself, which is always good. It’s great to start from the second row tomorrow, and I’m really happy.”