The Repsol Honda factory MotoGP team has unveiled the bikes that Marc Marquez and newcomer Jorge Lorenzo will ride in 2019.

The works RC213V bikes will continue to carry its title sponsor's orange, white and red colours, which have adorned Honda's premier-class machinery since 1995. Repsol's current deal with the team runs through 2020.

Both reigning champion Marquez and Lorenzo, who has replaced the long-serving Dani Pedrosa at the outfit, were present at the season launch event at Repsol's headquarters in Madrid on Wednesday.

This was despite Lorenzo undergoing surgery just two days earlier, the Spaniard having sustained a scaphoid fracture that will rule him out of the opening pre-season test at Sepang.

“Marc needs no presentation, for his actions speak louder than words. For Jorge, we want to welcome him in the team, and we are sure that the fact he accepted this challenge proves he is a true champion.” Honda Racing Corporation director Tetsuhiro Kuwata said.

“It is our duty to give them the best [service] possible, and we believe there is no better combination than Repsol and Honda for this task.

“Let's try our best with good spirit, high motivations, to continue being the reference of the MotoGP field.”

Also present were former Honda 500cc riders Mick Doohan and Alex Criville, who were part of its line-up in its first year with Repsol, in which Doohan became champion.

In addition to Marquez's crown, Honda will be defending its teams' and manufacturers' titles in a 19-race campaign that will kick off in Qatar on March 10. 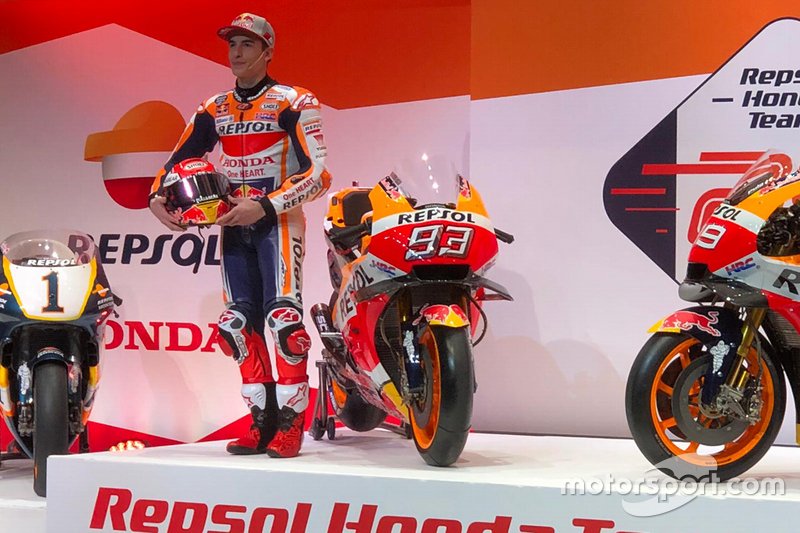