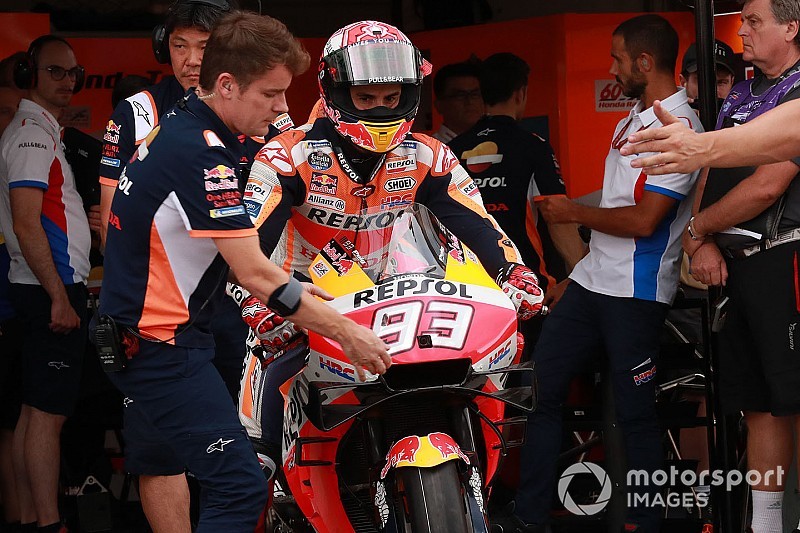 Marc Marquez says the risks he took on his way to pole position in Czech Grand Prix qualifying left Honda's MotoGP management “angry” with him.

Marquez was the first rider to switch to slicks on the drying Brno surface midway through Q2, and went on to take pole by a margin of 2.5 seconds despite rain falling again late in the session.

However, Marquez admits the team's “target” was not pole, and that his comfortable 58-point lead in the championship meant he “didn't need” to risk as much as he did.

“After analysing the situation I took a risk that I didn't need and I already see in parc ferme that some members of the team were very happy, but some of them – the important ones – the ones that push me more, they were angry because I took too much risk," he admitted.

“The team did a good job with the strategy, they were prepared with the second bike, all the mechanics were in the correct positions. I went out and the problem was it started to rain, couple of spots of rain on the visor but the chance was there.

“The decision was there and I tried to do my 100 percent, and lucky for me [I got] pole position. But I feel much, much better because I didn't crash, and this is the most important.”

When asked if he pushed so hard in qualifying to make a point to his rivals for the race, Marquez said this was not the case, and that Pramac Ducati's Jack Miller's pace on slicks forced his hand.

He also admits if a similar situation arises in the future, he will concede his push for pole.

“But the last lap, for example, is the one that if there is a next time, I will not do it [again], because my target was the front row and in the last lap I took too much risk.

“In the end pole by 2.5s, but the distance between first and second on the grid is the same.

Zarco: Brno qualifying shows "I still have the ability"