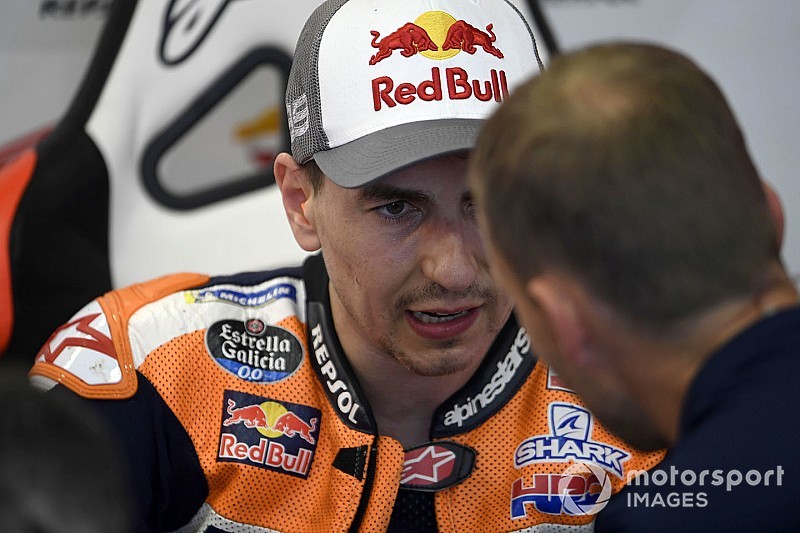 Marquez has enjoyed regular success with the RC213V despite its reputation as a recalcitrant machine, the Spaniard having won three titles on the trot and leading the current season's riders' standings.

Lorenzo, brought in to replace Dani Pedrosa alongside Marquez in the off-season, has thus far struggled to get to grips with the new bike, and visited the Honda factory in Asakadai after the Mugello round in order to help his adaptation.

Lorenzo suggested at Mugello that Honda is reluctant to make significant tweaks to the RC213V due to Marquez's results - and speaking ahead of the Barcelona round, Puig confirmed the firm isn't entertaining major changes to the package.

"In the end, what's happening is what has happened in the recent years. Marc is leading. The surprise is Jorge's results, but he doesn't hide or make excuses.

"The bike's base is not so bad because it wins the championship nearly every year. That Jorge is not adapting to the bike doesn't mean that it's bad. What we can't do is change the bike just because one rider can't adapt to it, especially if Marc is winning."

Speaking likewise in Barcelona, Lorenzo said some of the parts that he had worked on in Japan will already be on the bike this weekend, with another update "on the ergonomics side" coming for Assen.

He stressed it "will not solve the situation to be able to fight for victories and podiums tomorrow", but also conceded the onus was on him to gain a better understanding of his current package.

"I said in the last races, it's gonna be a long process," Lorenzo said. "And it's still quite far to understand perfectly how to ride the bike, especially in the entry of the corners – that is one problem, of experiencing or understanding. And the other problem is the comfort on the bike.

"We are working on this process, to make my shoes more comfortable for me. It's like, for example, running a marathon if you are an athlete; you are a good athlete, you can finish the marathon, you can be quite fast, but the shoes are a little bit too small or the shape of the shoes is not for you.

"The shoes themselves, run by other sportsmen, are very competitive. But at the moment not for me.

"But for sure if I will be more comfortable on the bike, I will be more competitive. That's why we decide to make a big travel to Japan, to accelerate this process as soon as possible, with the possibilities that we have."

Quartararo: Mid-season surgery a must to avoid DNF at Assen