Honda unsure how long Lorenzo will take to adapt 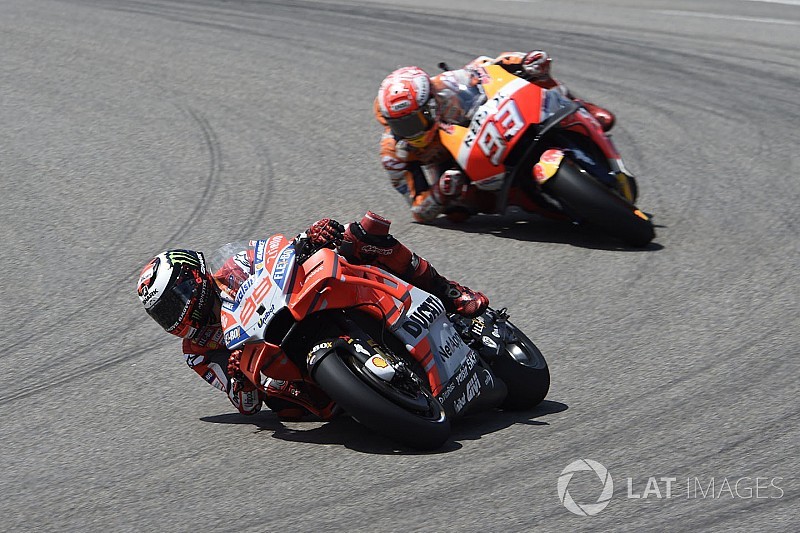 Honda MotoGP boss Alberto Puig says he can't be sure how long it will take Jorge Lorenzo to adapt next season as he moves to the team from Ducati.

Lorenzo will head to Honda after two seasons at Ducati, where he registered his first winless premier class campaign last year as he struggled to acclimatise to the Desmosedici after nine years at Yamaha.

However, the 2010, '12 and '15 MotoGP champion finally scored his first win in Ducati colours last month at Mugello, following that up with a second success at Barcelona - although the Italian marque's decision to replace him with Danilo Petrucci came before that.

While Puig said Lorenzo's record suggests he has the "potential" to recreate his recent race-winning form at Honda, he admits there is uncertainty at how long it could take for this to happen.

"Lorenzo has three MotoGP titles, we believe he has a potential to make good results with our bike," said Puig. "We expect he will try to get to the level and race to win, as he did in the past.

"But you never know how a rider can adapt to a machine – sometimes it’s easy, sometimes not easy. It took him quite a long time to understand the Ducati. Once he understood, he won two races in a row.

"We expect him to be fast. How fast? We don’t know. When will he be fast? Also we don’t know.

"But we believe with his potential and his racing career, he is not coming to Honda [just] to stay out on track."

Lorenzo will replace the retiring Dani Pedrosa in 2019, and Puig says the fact that his new signing has a fundamentally similar way of riding to the man he replaces could help ease his transition.

"Both [Lorenzo and Pedrosa] in a way are smooth," said Puig. "Lorenzo carries speed in the corner, when he has the feeling, and Dani is good at turning and picking up the bike.

"To have different riders is very interesting from our side because you can develop machines, they can learn, try to see different ways. The engineers learn from the riders, so let’s see what Lorenzo brings to Honda."