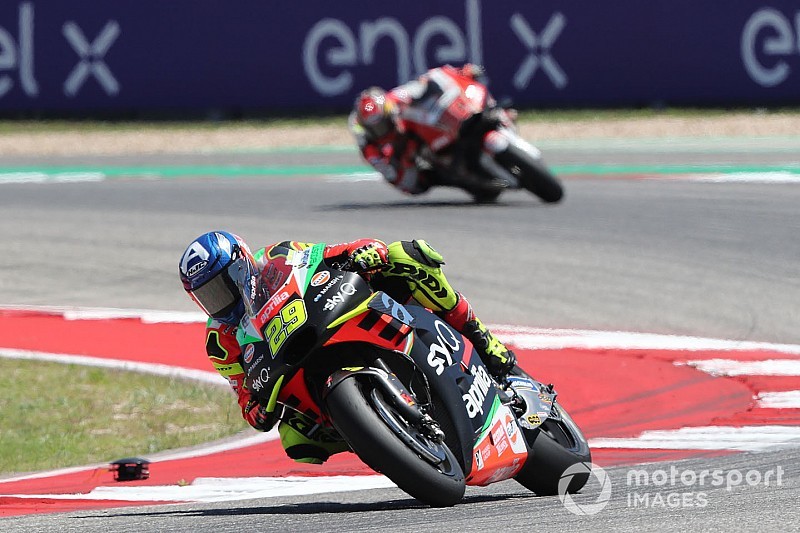 Aprilia MotoGP rider Andrea Iannone reckons that his teammate Aleix Espargaro's current approach is "not productive" because he is too used to the RS-GP bike's problems.

Iannone joined Aprilia for 2019 and has so far fared better than Espargaro's previous teammates, scoring points in two of the three races.

But he has only collected six points so far as opposed to Espargaro's 13, the Spaniard finishing in the top 10 twice.

However, while Espargaro has suggested Iannone is "struggling a lot", the Italian said that he is sacrificing results in order to develop the bike.

He believes that Espargaro has gotten too used to the RS-GP's negative sides and has adapted to those issues rather than trying to fix them.

"Aleix has gotten used to the bike by now and so he doesn't see a lot of flaws," said Iannone. "He has learned to get over certain things, to live with them, but they need to be resolved.

"Aleix rides hard, but he rides this three-year-old bike and adapts to his problems.

"I rather prefer to go slower to understand how a bike should behave during a race, to make progress and see them over time."

Iannone said that he is willing to wait to be able to make headline results with Aprilia.

"Aleix had the opportunity to notice a lot of things when he saw my side of the road and realized that this way you will never make a podium bike, because you don't even try to create certain advantages that others have.

"I'm happy to make my contribution, but I have to give Aprilia time to process and react. This is happening, but you have to be patient.

"I'm very relaxed because I have to choose between trying to build a competitive bike or looking for performance. But if I choose performance, who does the other thing?"

He explained that he rides with reduced levels of traction control, as using the RS-GP's electronics at their normal capacity doesn't allow him to ride as fast.

"Every rider try different riding styles, I was always focused on my riding style and I have to say that especially with Sam [Lowes], Scott [Redding] and Andrea my riding is quite different from them, how I ride and how I set up the engine brake, the TC.

"I use the TC too free, to be able to use the power of the bike, but it is not maybe the way that we have to ride in MotoGP.

"I adapt quite a lot to the bike but I am not sure this is the solution because what we need now is that the bike improves because I am completely at the limit of the bike, I can't go faster.

"Andrea was clear with the engineers, saying he doesn't care to finish far for the moment, but to work on the right direction to improve the bike.

"I am not saying I am not working on the right direction to improve the bike but if, for the moment, to ride with the normal level of TC is not good, and you are not fast, I will reduce it to go faster."