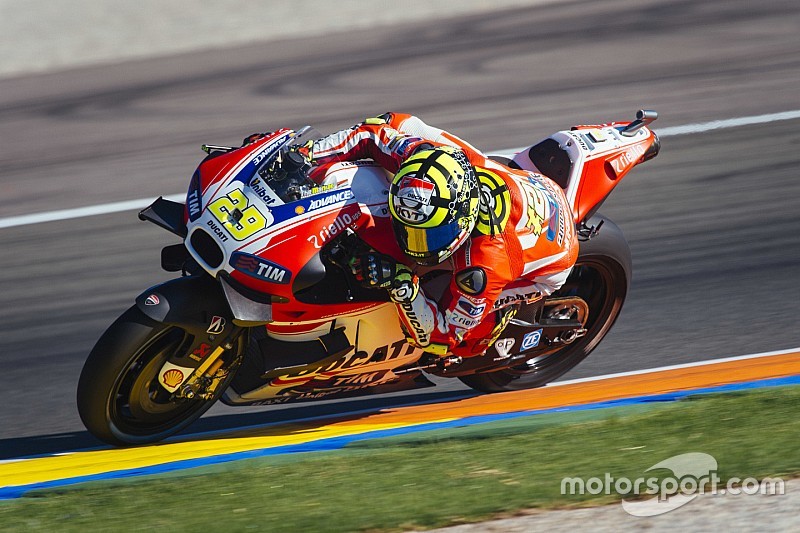 Andrea Iannone has ruled out riding to help Valentino Rossi clinch the MotoGP title in the Valencia Grand Prix, instead prioritising his points battle with Dani Pedrosa.

Having been awarded three penalty points for his clash with Marc Marquez in Malaysia two weeks ago, Rossi will start Sunday's Grand Prix from the back, and must fight through the field to have any chance of denying poleman Jorge Lorenzo the title.

After the events of the controversial Sepang race, Iannone, a long-time friend of Rossi, was called upon by fans of the Yamaha rider to do everything possible to help Rossi's title bid at Valencia.

But, speaking after qualifying, the Ducati rider was dismissive of such a notion, saying: "Help Valentino? What can I do? Give him my bike so he can start further up the grid?

"I can't do anything, I must focus on my battle with Pedrosa [for fourth in the points] and that will be my goal for the whole race."

Iannone's Ducati teammate Andrea Dovizioso, meanwhile, insisted he would not be making any concessions for the title fight.

Asked about the 'unwritten rule' of giving title contenders extra room in battle, the 29-year-old simply replied: "If it's not written, it doesn't exist."

The sector times that leave Mercedes' rivals fearful for Monaco