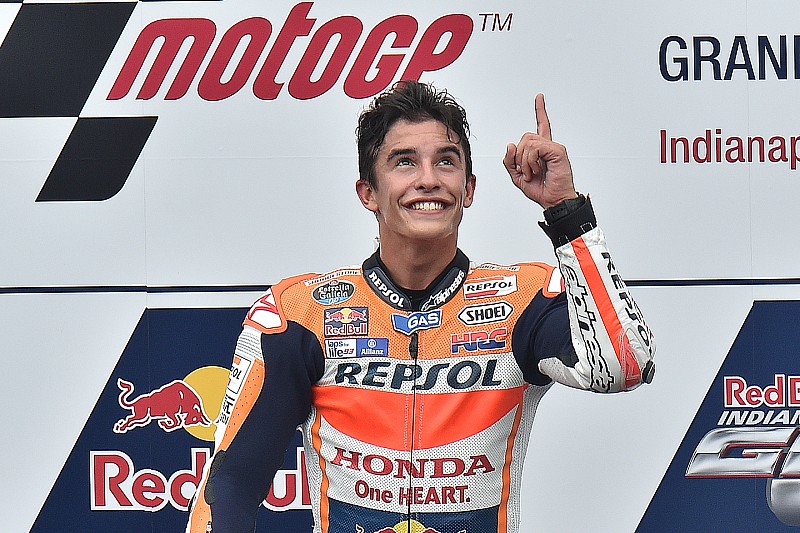 Marc Marquez won the Indianapolis Grand Prix, round 10 of the MotoGP Championship, with a late pass for victory on longtime leader Jorge Lorenzo around the Brickyard’s road course.

From a dry starting grid, after an earlier rain shower, poleman Marquez was beaten into Turn 1 by Lorenzo after a fantastic start.

Marquez stalked Lorenzo in the early stages, both pulling clear of Pedrosa. Rossi dealt with Iannone, when the Ducati man ran wide on lap two, and he chased after Pedrosa.

Marquez and Lorenzo had both fallen heavily in warm-up, but neither showed any after-effects as they battled it out for the lead. Pedrosa kept a watching brief in third, keeping clear of fourth-placed Rossi.

Iannone had Smith, Espargaro and Pramac’s Danilo Petrucci for company, as Cal Crutchlow fought back from a big moment at Turn 2 on the opening lap, dropping from fourth on the grid to the bottom of the top 10. He passed Petrucci with a block pass for eighth position on lap eight, and overtook Pol Espargaro a few laps later.

The abrasive nature of the Indy road course meant that rear-tyre usage was always going to be big factor in the outcome of the race. Lorenzo’s lead was over a second after 10 laps, after Marquez had a big slide at Turn 16. Rossi came on strong at this point of the race, and closed down Pedrosa for third.

By half distance, Marquez began to make his move, closing right up with Lorenzo again, as Rossi latched onto the rear of Pedrosa – the Repsol Hondas the filling in a works Yamaha sandwich.

With 10 laps to go, Rossi dived past Pedrosa with a perfectly-timed lunge for third at Turn 2. By then, Lorenzo and Marquez were too far down the road to chase down.

Rain flags appeared with eight laps to go, as light drizzle began to fall. Pedrosa came back at Rossi for the final spot on the podium, taking a look down the inside at Turn 1 with six laps remaining.

A lap later, Pedrosa made the move stick on the front stretch to retake third, but threw it away by running wide soon after.

The gloves came off at the front with four laps to go, as both leaders dipped into lap record pace. With three laps to go, Marquez sent it up the inside of Lorenzo at Turn 1, with Lorenzo unable to find a way back past at Turn 2.

Lorenzo fought back and started the final lap right on Marquez’s tail. Behind them, Pedrosa nicked back third from Rossi at Turn 1, but the Italian legend battled ahead again through Turns 2 and 3.

Marquez's victory – with Rossi grabbing third – limited the damage to Rossi's points lead, which drops to nine over Lorenzo. It extends Marquez's amazing unbeaten record in MotoGP on American soil.

Iannone finished fifth, ahead of Smith, Espargaro and Crutchlow.

A wretched weekend for Ducati’s Andrea Dovizioso was complete when he ran wide at Turn 2 and fell to the tail of the field on the opening lap. He tigered back into the top 10, but ninth was as high as he could make it, after passing Petrucci.