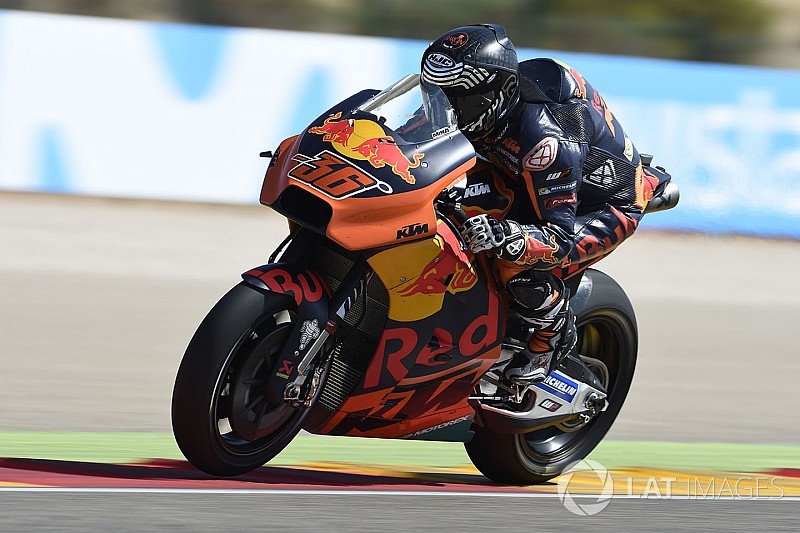 KTM test rider Mika Kallio says he expects his third MotoGP race appearance of the year in Aragon to be his final one of the year, despite his strong performance at the Spanish track.

Off the back of a strong ride to 10th at the Red Bull Ring in August, Kallio was offered an extra wildcard outing aboard the RC16 in Aragon last weekend.

The Finn impressed by qualifying directly to Q2 with the fifth-fastest time in third practice on Saturday morning, albeit only managing to line up 12th on the grid with after crashing in the closing stages.

He ran as high as eighth in the early laps of the race before eventually coming home 11th, one place behind lead KTM regular Pol Espargaro but well ahead of Bradley Smith, who was 19th.

But, despite once again outperforming the under-pressure Smith, Kallio believes that last weekend's Aragon race is likely to be his last of the season.

"At the moment we have not discussed anything. Basically I had these two races, Germany and Austria, and after these two races we thought 'ok maybe we can come also here'. Now we did it.

"I believe this is the last one for this season, hopefully next season we can do something more."

Kallio, who was shortlisted for an Avintia Ducati ride but lost out to Moto2 rider Xavier Simeon, reiterated that his goal remains to secure a return to full-time MotoGP action.

He last a full-time ride in 2010, with the Pramac Ducati team, before returning to Moto2 – where he was runner-up to Tito Rabat in 2014 – and then joining the KTM project at the end of 2015.

Despite failing to match his Austria result, the 34-year-old was still content with his Aragon performance, saying rear tyre drop-off was to account for him dropping behind Espargaro.

"I'm really satisfied with the result, especially the first half of the race was really good laptime-wise if you compare them to the front guys, we were almost the same," recounted Kallio.

"The gap to the front was really small for the first 10 or 11 laps.

"We are still struggling a little bit to keep the tyre life, it seems especially I'm struggling more than Pol for the last laps, that's why he was able to overtake me."

Marquez will be "very difficult" to beat to title - Rossi