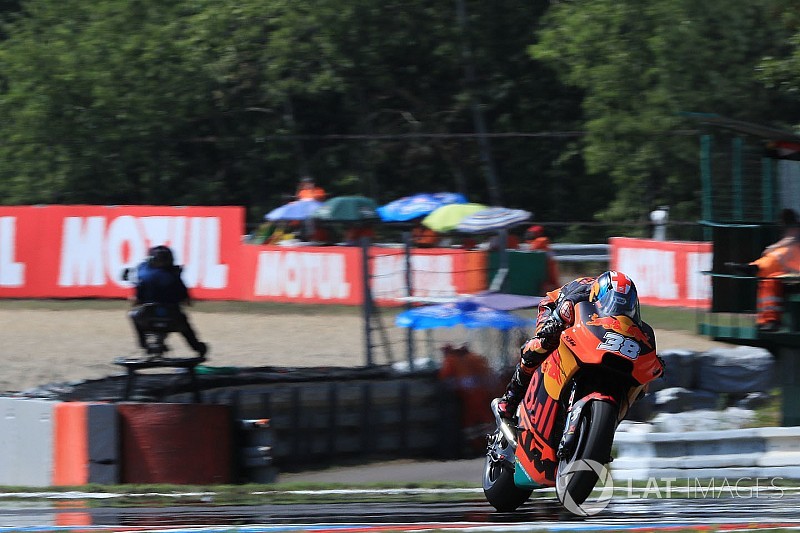 KTM says its Czech Grand Prix “disaster” marked its “worst day” since the inception of the Austrian marque’s MotoGP project.

Pol Espargaro’s warm-up crash, in which the Spanish rider broke his collarbone, reduced KTM’s presence to just one bike in Sunday's Brno race for Bradley Smith.

But Smith’s race only lasted as far as Turn 3 on the opening lap, as the Briton was a victim in the three-way melee triggered by Honda wildcard Stefan Bradl.

“Today was a disaster, the worst day since we started the project,” said KTM team manager Mike Leitner. “The only positive point is that after that crash Bradley was not hurt, he’s ok.”

With test rider Mika Kallio still injured from his Sachsenring crash, development duties for KTM’s 2019-spec bike were transferred to Smith for the Brno weekend.

Smith had two new-spec engines to use during practice and qualifying, believed to feature a counter-rotating crankshaft, but returned to the older version for warm-up and the race.

Leitner explained that some minor technical niggles with the new unit convinced KTM to revert to the older engine.

“We had some electrical issues, actually,” he said. “Because also we don’t have the test rider [Kallio] now, you are forced to bring some things to the race team.

“Of course not everything works out in the first moment. The situation [is] we don’t have Mika, it’s making our life in the races harder.

“He [Smith] went to the old engine, the spec we are using this year, because we had small question marks and we don’t want to take any risks.”

KTM likely to field one bike in Austria

Leitner also revealed it was “99 percent” certain that KTM will field a single bike in Austria for Smith if Espargaro is unfit to race, owing to a lack of available replacements at such short notice.

Kallio had also been due to race at the Red Bull Ring as a wildcard, but will not do so as he recovers from the surgery he had on his right knee after his Sachsenring crash.

“We would like to have two bikes at the home race, but you don’t find these people around the corner,” Leitner said. “The people who can ride this kind of bike, they have contracts.

Referring to which engine Smith would use in Austria, he added: “Most probably will not do the home race with one rider playing [with different specifications]. We will play safe.”