Brad Binder admits he’s “not enjoying life” on the 2021 KTM currently after suffering a race of ‘survival’ in the MotoGP Qatar Grand Prix.

By:
Lewis Duncan
Co-author:
Mark Bremer
Listen to this article

KTM struggled during testing with its new bike at the Losail circuit, with the nature of the track working against the characteristics of the RC16.

Those woes continued into the Qatar GP, with Binder qualifying down in 19th and only able to salvage 14th in the race after experiencing front tyre wear in the latter stages.

“I got a really good start, which was really positive because last year I really battled with some of my starts and we had a great one, which was great, it was so nice to see I eventually got a good start,” the MotoGP race winner said on Sunday.

“After that we were in the group with the guys more or less and I could see the group in front and I truly believed today was our day.

“I thought that we could be competitive and unfortunately with nine laps to go my front tyre gave up on the right side.

“I noticed I kept tucking the front and then I looked at my board and saw nine laps to go, and then I knew I was in trouble.

“So, from then on I was just trying to survive until the end.

“I mean, unfortunately it’s part of the job. I’m not enjoying life where I am right now, my team’s not having much fun at the back either.

“So, we’re in this boat together and the only thing we can do is pretty much dig ourselves out of this hole.

“It’s better to do it with a smile than hate life, so let’s carry on.” 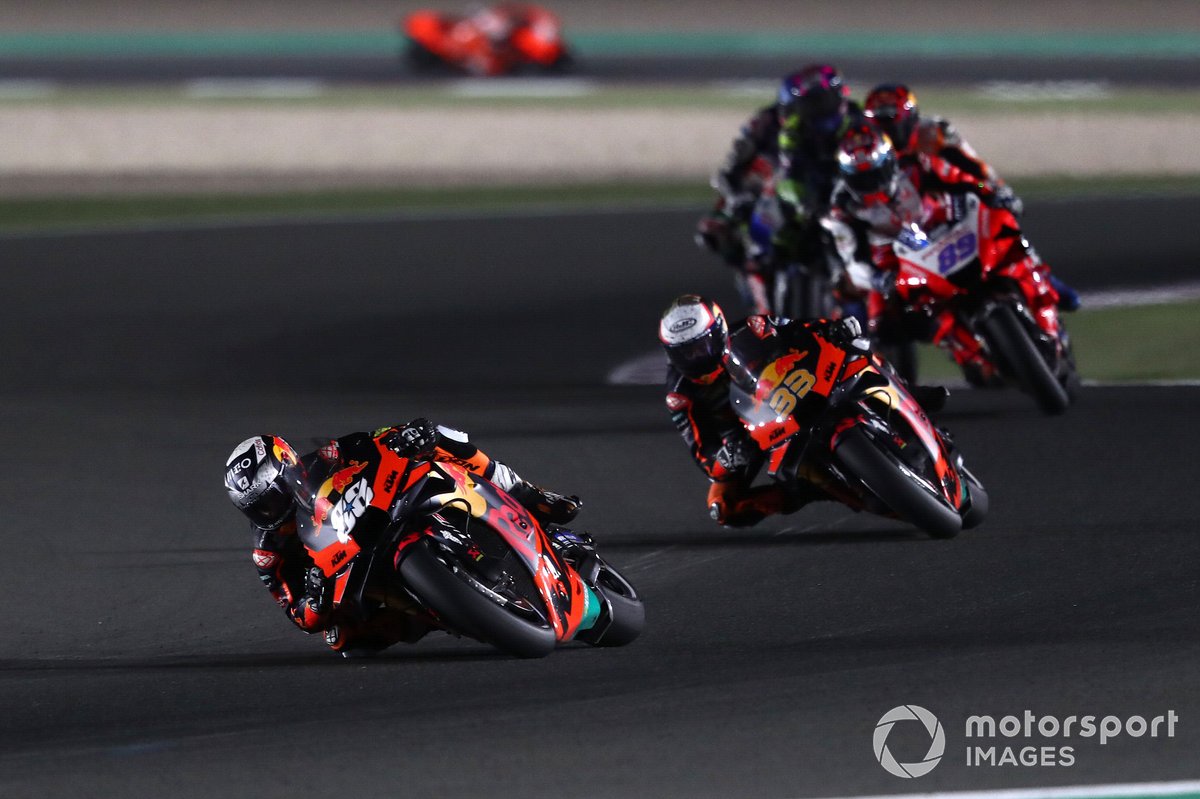 Team-mate Miguel Oliveira showed decent race pace in Saturday’s FP4 session, but had to make his way through from 15th on the grid and had similar front tyre struggles.

Ending the race 13th, Oliveira believes his performance was dictated the front tyre allocation in Qatar, with everyone forced to run the softest option due to the evening conditions – a compound the KTM doesn’t work well on.

Expressing frustration at Michelin, Oliveira said: “Unfortunately the line is so narrow between having the right tyre, the right temperature and just getting our performance right.

“To be honest, it’s really disappointing because the tyre allocation here [in Qatar] is chosen by elimination and not by choice.

“It’s not our free choice to use the soft tyre. We use it because we just cannot use another tyre.

“The combination between the carcass and the rubber from the medium tyre, it’s just wrong and we have communicated that since day one when we started testing here, and in fact nobody uses the medium.

“So, you can understand as a tyre manufacturer we feel we should have different options available and that can actually work after these many years of experience they [Michelin] have.

“And it’s happening quite the opposite. We cannot spend time during six months developing a bike to a certain kind of tyre and just have this tyre removed from the allocation.

“So, we feel the result is not the reflection of any kind of bike issue.”