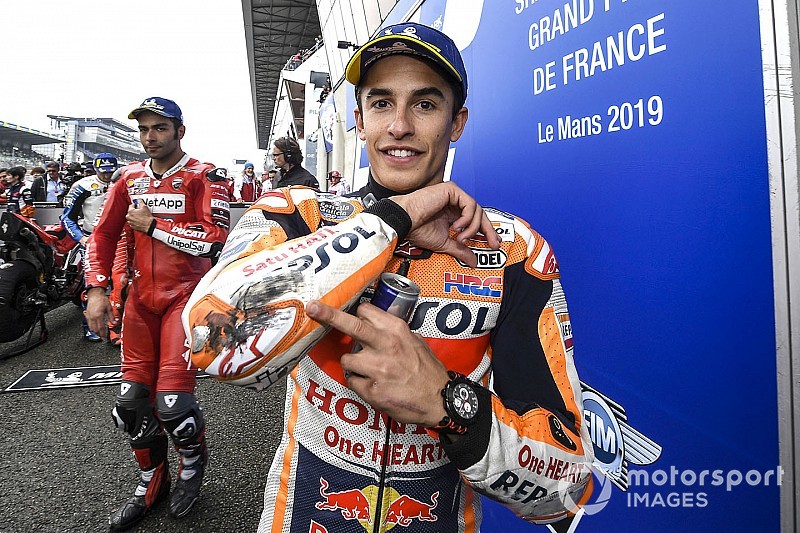 Marquez set his reference lap of 1m40.952s on wet tyres at the very start of Q2, when the damp track surface was at it best, just as the ever-present light rain had intensified.

On the very next lap, Marquez had a moment at the Turn 5 left-hander and then immediately slid off into the gravel at the La Chapelle right-hander.

He picked up his RC213V and continued on with seemingly minimal damage, and though he could not improve his time, his pole had not come under threat.

Two Ducatis – the works bike of Danilo Petrucci and the satellite Pramac-run machine of Jack Miller – will join Marquez on the front row, having likewise made the most of the track conditions early in Q2.

Petrucci came up 0.36s short, while Miller was another half a tenth behind, before crashing at Turn 3 late in the session.

Fellow Ducati rider Andrea Dovizioso will be the first bike on the second row, joined by the Yamahas of Valentino Rossi and Franco Morbidelli.

Rossi had escaped a dramatic opening segment in mixed conditions, gambling on slicks from the very start while all 11 of his Q1 rivals took on the wet compound.

His first lap on slicks was some three seconds off the pace, but his second – with tyres up to temperature and his confidence increasing – was quickest of all.

He continued to improve from there, the tyre decision proving a masterstroke and allowing him to progress comfortably despite limiting himself to a single run.

However, Rossi – along with his Yamaha stablemates Maverick Vinales and Fabio Quartararo – then bet on the slicks again at the start of Q2, with all three losing crucial track time when they were forced to return to the pits and equip the wet tyre.

And while Rossi recovered to fifth late on, Quartararo and Vinales – who had both topped practice sessions during the weekend – had to do with 10th and 11th on the grid respectively.

Takaaki Nakagami was seventh for LCR Honda, 0.008s up on the works bike of Jorge Lorenzo, with Aprilia's Aleix Espargaro joining them on the third row.

Espargaro's brother Pol will complete row four for KTM, failing to set a time in Q2 after he crashed at Turn 6.

Several riders in Q1 took their cues from Rossi in switching to slick-shod bikes midway through the session, but none were able to match his pace or overhaul Morbidelli's wet-tyre effort.

Pramac Ducati rookie Francesco Bagnaia was some 2.3s off Rossi's pace, but was still best of the rest in Q1, pipping KTM rider Johann Zarco to 13th on the grid by half a tenth.

Usual frontrunners Cal Crutchlow (LCR Honda) and Alex Rins (Suzuki) both stuck to the wet tyre, the former improving at the death to secure 15th and the latter settling for a lowly 19th place.

Slotting in between them were the Tech 3 KTM of Miguel Oliveira, who had a late-session off, the Avintia Ducati of Karel Abraham and Rins' works Suzuki teammate Joan Mir.