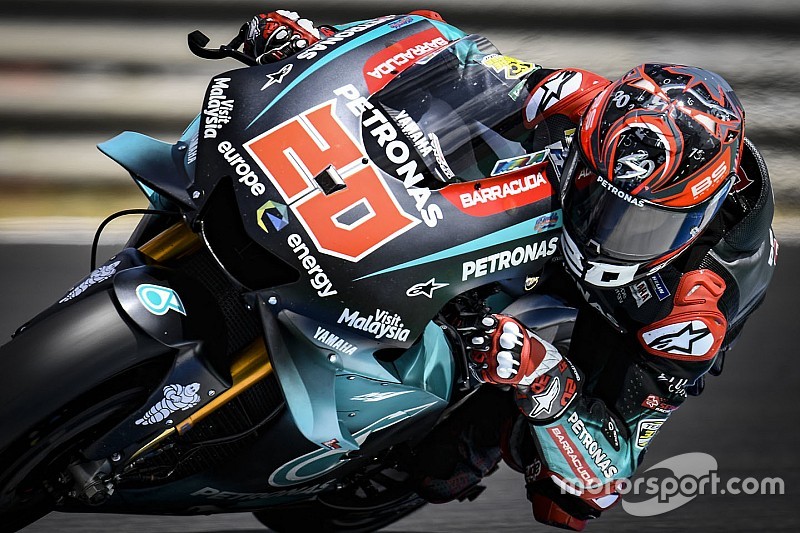 Petronas SRT Yamaha rookie Fabio Quartararo was quickest in the first practice session ahead of his home MotoGP race at Le Mans.

Quartararo, who had become MotoGP's youngest-ever poleman last time out at Jerez, was the only rider to dip below 1m32s in FP1, using a pair of fresh soft tyres to lead nearest rival Andrea Dovizioso by 0.127s.

Marc Marquez and Jack Miller were class of the field in the opening minutes, taking turns out front as they traded fastest laps, with a 1m32.540s from the Honda rider edging Miller by 0.011s at the conclusion of the opening run.

From there it was another 20 minutes until Marquez tucked in behind Quartararo to lower the benchmark by a tenth.

But KTM's Pol Espargaro was soon leaping up in the classification as he grabbed Miller's tow, and his final attempt behind the Aussie's Ducati took him to the top spot above Marquez.

Miller then slotted in behind Vinales and the pair took over out front with 10 minutes to go, the former heading the latter initially but then dropping out of the Yamaha man's slipstream.

Now alone on track, the Spaniard leapfrogged Miller with a 1m23.203s, before pitting at the end of the next lap despite having gone even faster in the first three sectors.

Dovizioso came within 0.006s of ousting Vinales with a minute left on the clock, only to have his laptime cancelled due to a track limits infringement.

He then jumped ahead of Vinales at the chequered flag, and kept the lap this time, but by then Quartararo had fired in a 1m31.986s.

Marquez, who along with Vinales did not run a soft rear tyre, was fifth, 0.004s up on Espargaro and 0.005s up on Miller, the latter completing a top seven split by just 0.252s.

Mir was seven tenths up on his championship frontrunner teammate Alex Rins, who ended the session in a lowly 17th place.

Rossi, who led LCR Honda's Cal Crutchlow and Quartararo's teammate Franco Morbidelli, had a mechanical failure mid-session when the chain came loose on his Yamaha and shot off across the track.

Under-pressure Honda rider Jorge Lorenzo took 14th, a tenth down on rookie Francesco Bagnaia. Lorenzo's session was compromised by an early crash at the Garage Vert double right-hander, as he fell after running wide onto the outside kerb.

Marquez made the same mistake at the same place later in the session, but used his knee to keep the bike upright and avoid a crash.

New coach can give Zarco "more freedom in the brain"