Honda MotoGP rider Jorge Lorenzo will miss Sunday's Dutch TT after fracturing his back in a crash in the first free practice session on Friday morning. 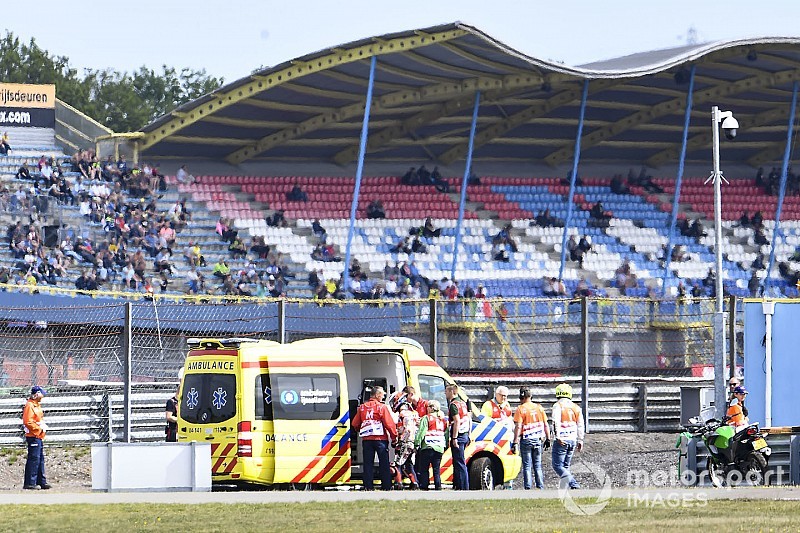 Lorenzo crashed going through the fast left of the Ruskenhoek at Turn 7 in the final five minutes of FP1 and rolled through the gravel several times.

He had to be helped up by circuit staff and was taken to the medical centre, before being transferred to a local hospital for scans.

Complaining of a sore back and chest, Lorenzo – who missed the second session on Friday at Assen – was soon diagnosed with a fractured D6 vertebra and will sit out the remainder of the eighth round of the season.

With the German Grand Prix coming next weekend, Lorenzo faces a race against time to be fit for the Sachsenring event.

Lorenzo has been battling injury for the past 10 months, having injured his foot in a highside crash at the start of last year's Aragon race.

He fractured his left wrist in a similar accident during practice for the Thailand race, which forced him to miss the rest of the flyaway events.

Lorenzo would re-fracture the same wrist in a training accident in January, which ruled him out of the first pre-season test at Sepang. He also suffered a cracked rib in a heavy crash during FP3 in Qatar.

Honda test rider Stefan Bradl is present at Assen carrying out duties for German television, and may be called up to replace Lorenzo for Saturday's third practice.

The 2011 Moto2 world champion completed a wildcard for the HRC test team at the Spanish Grand Prix at Jerez, and managed to beat Lorenzo in 10th spot.