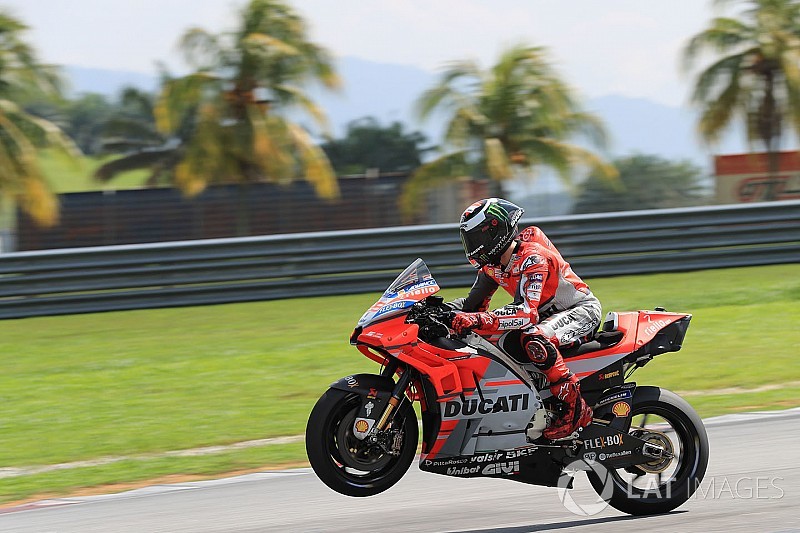 Jorge Lorenzo reckons that the Ducati GP18 can still be significantly improved despite the Spaniard topping the Sepang MotoGP pre-season test.

Lorenzo set an unofficial new lap record at the Malaysian circuit on the final day of the test with a time of 1m58.830s.

The Spaniard previously said that the new bike is closer to his riding style as the GP18 is improved in cornering, which has been the Ducati's weak point traditionally.

However, Lorenzo reckons the bike can still get a lot better, saying: "I think we still have quite a big margin to arrive to our maximum potential.

"This is a good sign because we finished first today and we still have some margin.

"This time as I told you the chassis improved, the engine is more smooth in the corners, probably still we have to improve in the high RPM but we will keep working, we will find a way.

"For this track [Sepang], new bike is better, [we can] be fast for one lap.

"We have to see for the race because we didn't have the chance to make a completely full simulation but feelings are very good.

"This bike gives more confidence and it is more to my riding."

Andrea Dovizioso, who had a crash but still took fourth on Day 3 at Sepang, echoed Lorenzo's claim over the bike's improved cornering.

In addition, he said that the team is in a better position than after the first test of the previous season, which ended with Dovizioso only missing the title at the final round.

"For sure [we are in a better position] for a lot of reasons, first because we fought for the championship last year and this created in my mind and in the mind of my team a different approach of everything," he said.

"This is for sure positive but also the new bike is better than last year. Last year we were quite fast but we weren't the fastest these three days. The feeling was really good."

Zarco to revert to 2016 Yamaha chassis for Thailand test