Jorge Lorenzo says he still faults Marc Marquez for the Aragon crash that left him injured, despite praising his MotoGP rival for getting in touch after the incident.

Lorenzo crashed out on the opening lap of the Aragon Grand Prix after a dive down the inside of Turn 1 from Marquez forced him off the line.

The Ducati rider, who dislocated his big toe and fractured the second metatarsal on his right foot in the crash, criticised Marquez in the immediate aftermath of the race.

Asked about the incident a week and a half later, ahead of this weekend's Thailand race, Lorenzo said: “For sure whatever I say now will create a polemic. And I believe we have to speak about Thailand now, not about what happened two weeks ago. But you asked me the question and I cannot be [impolite].

“What I think after the race, maybe in hot conditions, I think exactly the same in the cold. I think my incident, my crash, was avoidable, and I only didn't finish the race and I'm here not 100 percent [fit] because of the action of Marc, that in my opinion was irresponsible and imprudent.

“I think he knows that, obviously he didn't want me to crash, but I think he braked too late, very very too late. And in bad position because he was completely on the inside.

“Was incompatible to make the corner in the way he entered the corner. And this creates my crash.”

However, Lorenzo, who will be teammates with Marquez at Repsol Honda in 2019 and 2020, gave credit to the reigning champion for contacting him after Aragon.

“He called me on Monday afternoon. He asked me my physical condition - this I appreciate, because probably not all the riders will do that. So this is good.

“The only thing that I hope that, if it's possible, in the future, less riders can suffer from this type of actions, like I'm suffering now, in this moment.”

When Lorenzo's latest comments were put to Marquez, he said: "I speak with him and he doesn't say the same, so I care more about [what was said on the[ telephone. Was okay."

Alongside KTM's Pol Espargaro, who fractured his collarbone at Aragon, Lorenzo was passed fit to ride at Buriram.

However, he remains uncertain whether he will be able to take part in the inaugural Thai MotoGP race.

“Hopefully I will jump in to ride tomorrow and I will have enough power and as few problems as possible to be able to race.

“The feeling is not very good, when I'm walking, and I expect that for sure when I put my feet on the bike, I will have pain, but only tomorrow I will know exactly my feelings.

“The rest of the body is perfect. Was already perfect on Sunday after Aragon. The only problem is these [two toes], especially the big one that was completely out of the place, and the little one close to that [which] is broken.

“The little one will heal in three months, but luckily it's not out of the place. If I don't crash again, these is no risk to get worse, but the painful one is the biggest one.” 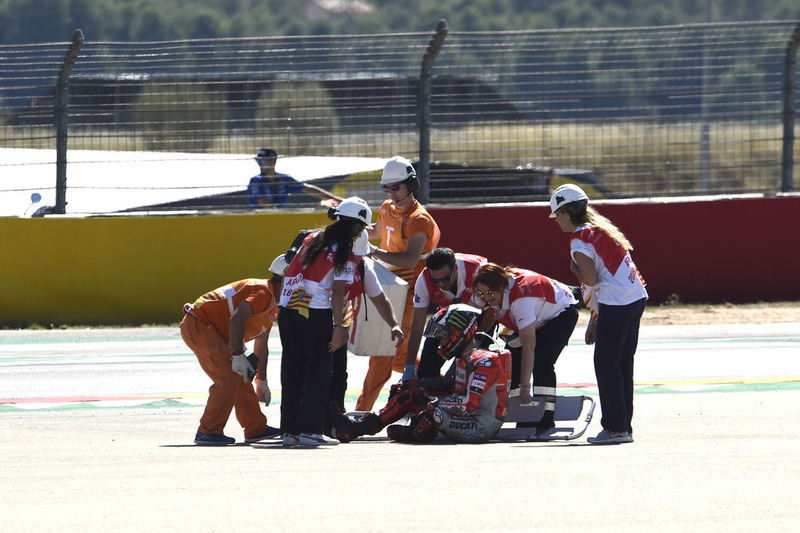