Following yesterday’s cancellation of practice sessions due to weather conditions, the premier class were today given a special 75-minute qualifying heat, allowing the drama of the Japanese round to finally move to the track.

Defending world champion Lorenzo made full use of the extended session, getting straight out onto the wet circuit to start working on his race set up. Having initially swapped the top spot with rival Marc Marquez early in the session he dropped down the timesheets. After some work on the set up he was back, rising quickly to 2nd after a third of the time had gone, 0.1seconds from Marquez in top. The top positions continued to change until with 15 minutes to go, when Lorenzo put the hammer down and delivered a perfect 1’53.965 to go over half a second clear at the top. Whilst his rivals were able to improve, so was he, dropping even further to a 1’53.471 in the final seconds to secure pole 0.65 ahead of Marquez. 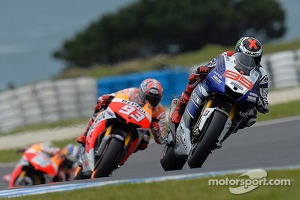 Teammate Valentino Rossi was also looking comfortable around the Motegi circuit. The nine-time world champion was one of the few who climbed to the top of the timesheets early in the session with a 1’59.304. He continued to be a key protagonist, regularly swapping positions in the top four places with his rivals. With 30 minutes remaining Rossi had taken provisional second on the grid, just 0.12 seconds from Pedrosa on pole. The last minutes as usual saw a flurry of activity as his teammate took a stunning pole position. Rossi eventually took fifth on the second row at the end of the session with a 1’54.732 second lap.


1st / 1'53.471 / 25 laps
“I’m really happy, it was not so simple because my last memory of the rain was Assen. At the beginning I was a little bit scared and didn't want to crash. We were lucky to have the extended qualifying time to get used to the track. Little by little I got confidence and finally I felt really good with the bike and the grip of the track, especially under braking. It doesn't matter if it’s wet or dry tomorrow, it’s not my problem to think about it, I have to ride in whatever conditions we have. A wet race would be better for the championship though!”


5th / 1'54.732 / 29 laps
“The result is not so bad, I hoped to arrive on the front row, I’m not so far but I am behind. I was in a better shape when it was full wet and felt better with the bike. When there was less water on the track and some places were quite dry I was able to improve my time a little but not enough for the front row. Tomorrow will be a surprise because if it is dry we will have to make the best set up in the morning warm up and try to arrive competitively for the race!”

After both practice sessions were cancelled in wet and foggy conditions yesterday, FP3 and FP4 were also unable to take place earlier today, with torrential rain creating several large patches of standing water around the 4.801 km circuit.

Mist in the vicinity of the track also prevented the essential air ambulance from departing in the event of an emergency evacuation, though fortunately for the entire paddock and thousands of patient Japanese fans, conditions improved sufficiently enough for an extended qualifying session to be staged this afternoon.

Crutchlow and Smith battled for grid positions over an extended 75-minute session on a full wet track, though the earlier heavy rain stopped and track conditions improved throughout.

British rider Crutchlow will start from 11th position on the grid as the 27-year-old was unable to repeat his usually strong qualifying performance in the treacherous conditions. Crutchlow battled front grip issues in the closing stages and for only the second time in 17 starts in 2013, he will not line-up on the first two rows of the grid.

The intervention of the weather made Smith’s MotoGP debut in Yamaha’s all-important home round a tricky challenge, but the impressive 22-year-old acquitted himself superbly and gradually built up his confidence to challenge for the top 10 throughout.

He was confident he could challenge for a place on the third row until a small front brake problem meant his best time of 1.57.114 left him in 13th position.

After the weekend’s weather disruption, Crutchlow and Smith will take part in 50-minute practice session at 9:40am local time tomorrow morning, which takes the place of the regular 20-minute warm-up ahead of a 24-lap race that is expected to take place in the best conditions of the weekend.


11th 1.56.058 – 25 laps
“I am normally really strong in qualifying, so to be outside of the top 10 for the first time this season is obviously not where I expected to be. I was confident I could be in the top six because I am usually very fast in the wet and I was second in the rain at Le Mans earlier in the season. But on my last front tyre when the track was drying out, I couldn’t stop the bike for some reason. I pushed hard to improve but three times in the last two laps I ran off into the gravel and it is a shame because on one lap I was going to make a big improvement and gain a few places. It is going to be a very tough race from 11th on the grid but it looks like it could be a dry race, so hopefully it will be dry in the morning practice and we are not going into the race having never tried a dry set-up or slick tyres. At least it was good to finally go out after all the problems with the weather and hopefully after their patience the Japanese crowd will get to see an exciting battle.”


13th 1.57.114 – 23 laps
“In my first run I felt surprisingly comfortable on the Bridgestone rain tyres because I don’t have that much experience on them. The grip in the wet on this track is unbelievable and you can see that when Lorenzo is only eight seconds off the dry lap record. I was up to seventh and feeling optimistic that I could stay around that position but at the end of the session I had a small front brake issue and it was hard to stop the bike. With six really hard braking points here that cost me a lot of time and I think my pace was much quicker. It will be a difficult race starting from 13th and it looks like it will be dry tomorrow, so hopefully our base setting will work because we only have 50 minutes in practice to work on the race package. It has been a difficult weekend for everybody concerned but the Japanese fans have been incredible in waiting to see us on track. Tomorrow is a huge race for Yamaha in Japan and I will be giving it my all to get a positive result.”


12th 1’56.125 - 25 laps
“The YZR-M1 I am riding this time has some test parts in it and this was the first time I have ridden this spec on a wet track, so I wanted to find my rhythm as quickly as possible and verify the feeling of the machine and its settings. For that reason, I got out on the track as soon as the qualifying session started to begin running timed laps. After that I returned to the pit repeatedly and worked on the settings little by little to get the machine set for these track conditions, and in the process we were able to get a lot of data that made this a very fruitful qualifying. I was able to find a good rhythm and relieve the tension I had coming into today’s qualifying, and although preparing for tomorrow’s race in dry conditions is going to be difficult, I am determined stay calm and run a solid race. ”

Lorenzo emerges from the clouds to take pole position at Motegi