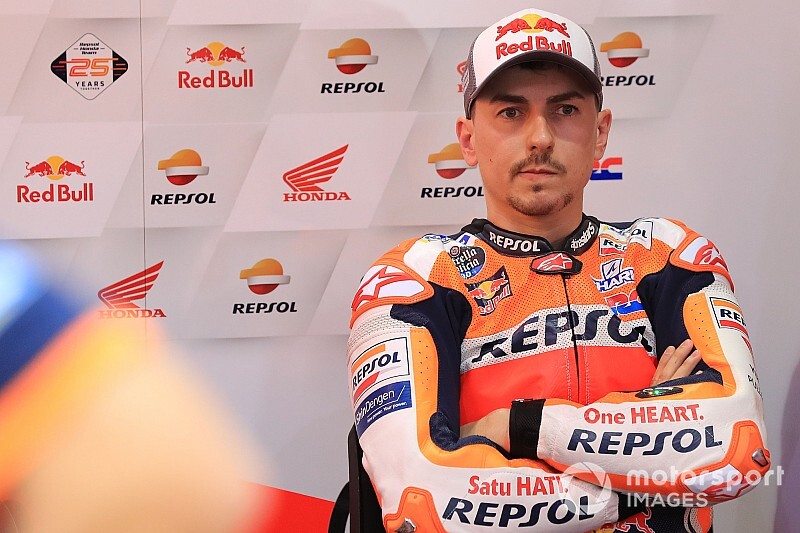 New Honda MotoGP recruit Jorge Lorenzo says he is "in pain everywhere" after suffering two crashes during Saturday's running in Qatar, including one in qualifying.

Lorenzo, still not fully recovered from a wrist injury sustained during training in the winter, had a hefty crash in Saturday morning's third practice session, high-siding off his bike at Turn 6.

He was taken to the medical centre but was declared fit to continue, going on to take 15th in FP4 and looking well-placed to advance from the first part of qualifying into Q2.

But the Spaniard crashed again in Q1, this time at Turn 2, the most critical point of the track during the changing conditions at night - which had led riders to call for an earlier race start time.

Lorenzo was the first of four riders to fall at Turn 2 in qualifying, with Tito Rabat, Johann Zarco and Jack Miller all suffering similar incidents.

With the race still set to start at 8pm local time on Sunday, Lorenzo believes it will be "survival" for everyone but especially for him, as he has pain in his back, wrist, fingers and feet.

"[It will be] a survival race for everyone," said Lorenzo, who will start his first race with Honda from 15th. "But especially for me because of my inexperience with the bike and my fitness conditions.

"Now it is not only the wrist but especially this back problem. Also the foot and fingers, I'm in pain everywhere.

"With these conditions, so cold, it's gonna be totally survival race for everyone in general but especially for me."

Lorenzo added that he might undergo further checks on Sunday, depending on how his condition changes overnight.

"We're gonna go to sleep now and let's see how I wake up tomorrow, if I feel not so well maybe I need to do some more checks," he said.

"If I feel better I will go to the track and let's see the race tomorrow.

"It has not been a great day today, very unlucky with the first crash because was a combination of factors that made me crash and was a very nasty crash.

"It created some physical problems. Also in qualifying I suffer a crash because the conditions we too cold. Not a good day for us."