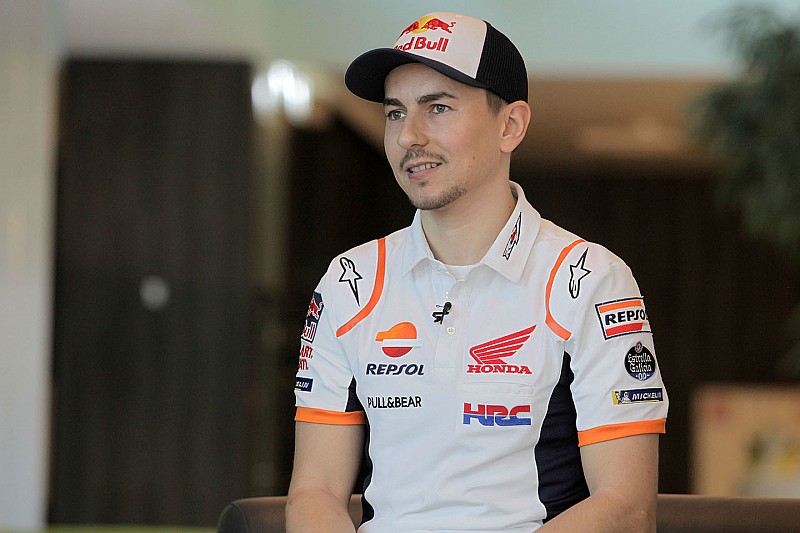 Jorge Lorenzo has revealed he feels "safer" on Honda's MotoGP bike than he did aboard the Ducati, owing to his new machine's more "compact" size.

After ending a tumultuous two-year spell with Ducati, Lorenzo had first taste of the Honda RC213V in post-season testing last year in Valencia and Jerez, and ended the latter test less than two tenths of a second off the pace.

Owing to his existing Ducati contract, Lorenzo was barred from speaking to media in either of those tests.

But in his first interview wearing the colours of his new Repsol Honda team, the Spaniard said he felt the smaller size of the Honda compared to the Ducati was a better match for his style.

"Last season I rode a completely different bike, that was very big and very tall," said Lorenzo of the Ducati. "Maybe it was a little too big for me.

"The Honda suits me better in terms of its dimensions. It’s more compact, smaller and I reach the ground better on it. I feel safer going into corners, because the closer you are to the ground, the more confidence you have.

"The first impression was positive and I saw a lot of potential there."

Last year, Lorenzo criticised Ducati for taking too long to respond to his requirements on the Desmosedici, with a new fuel tank that transformed his speed arriving after the team had already opted not to retain him for 2019.

The three-time premier class champion said Honda was already providing him with new material to help him feel more comfortable on the RC213V.

"One of the things that impressed me most was the ability of the Repsol Honda team to react, providing what you ask for," Lorenzo continued.

"I was quite clear, Honda took note of all my indications and within a few days they had everything ready, and we had a fuel tank almost 100 percent to my liking."

Lorenzo will go up against reigning champion Marc Marquez in the Repsol Honda garage next year, and says he will "try to learn" from the rider who has taken five of the past six MotoGP titles.