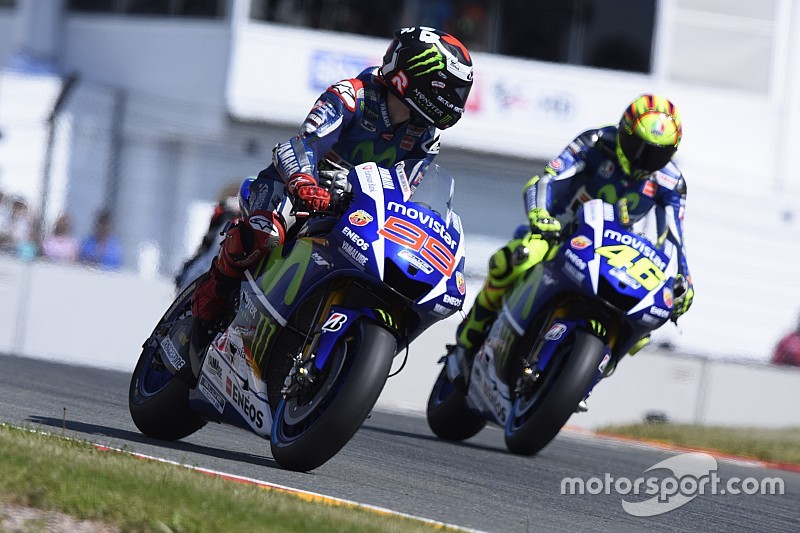 MotoGP champion Jorge Lorenzo says it is up to Yamaha teammate Valentino Rossi to mend their strained relationship after a fraught conclusion to the 2015 season.

A dramatic clash between Rossi and Marquez during the Sepang race followed, sending the Italian to the rear of the grid for the Valencia title decider, where Rossi said Marquez acted as Lorenzo's "bodyguard."

"Before the Malaysian Grand Prix, the relation among the racers was good, but then Rossi said that Marquez is helping me to win and he kept saying that," said Lorenzo to Indo-Asian News Service.

"Because of that, I got attacked on social media, especially from Italian fans.

"I have no problem with Rossi. If he wants to come and talk to me, I will willingly talk to him. It is on him."

Keeping aside their differences, Lorenzo added that for Yamaha to clinch the constructors' title, the team needs two top-line riders, even if this can lead to tension.

"It is always better to have the best riders because there is a better chance of winning the constructors' championship," he said. "If one rider is good and the other is not then you lose out on winning the title.

"Valentino for me is great as a teammate, because he acts as this stimulant to do even better and raise the level of competition.

"It is very good for Yamaha if they have two riders winning them points and races."

Fending off a rejuvenated Rossi on equal machinery was a tough job for Lorenzo in 2015, and he expects an even tougher battle next year with likes of Honda and Suzuki in the mix.

"This has been my toughest season yet," said the Spaniard. "2013 was also quite tough, which I lost at the end to Marquez by only four points.

"I have been extremely focussed this year, but 2016 will be tougher than this year and more competitive.

"Valentino will be fighting for the championship, then Pedrosa and Marquez will also challenge us. Suzuki and others could also be fast next season, so you never know."