Jorge Lorenzo stormed to his second consecutive pole position in two weeks with the Yamaha Factory Racing rider setting the fastest time during a revised 75 minute qualifying session at the Twin Ring Motegi circuit that incorporated the time lost to yesterday’s wet weather, although conditions today weren’t much better for the riders. The wet weather conditions brought up one or two surprises but once again at the front it was the familiar sight of Lorenzo and Marquez at the top of the timing sheets.

It doesn't matter if it’s wet or dry tomorrow, it’s not my problem to think about it.

Lorenzo’s fastest time of 1m 53.471s was good enough to see him starting ahead of main championship rival and current points leader Marque with the Repsol Honda rookie not risking as much as Lorenzo setting a best lap of 1m 54.129s. The Ducati Team proved once again their GP13 machine is better in wet weather conditions with Nicky Hayden securing a front row start for tomorrow’s AirAsia Grand Prix of Japan while Dani Pedrosa starts from the front of row two with the Repsol Honda rider’s best time of 1m 54.542s enough to start ahead of Valentino Rossi (Yamaha Factory Racing) with a 1m 54.732s lap and Andrea Dovizioso starting from 6th for the Ducati team 1m 55.036s.

Alvaro Bautista starts from 7th tomorrow with the GO&Fun Honda Gresini man setting a best lap time of 1m 55.135s and starting one place ahead of Stefan Bradl (1m 55.610s) who made a brilliant come back this weekend for his LCR Honda team after sitting out last week’s round at Philip Island due to a broken ankle. The best of the CRT machines was the familiar name of Aleix Espargaro on the Power Electronic’s Aspar machine while starting from 10th will be Ignite Pramac Racing’s Yonny Hernandez with a best lap of 1m 55.998s. 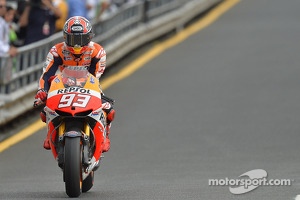 Lorenzo was very happy with securing another pole position and said, “I’m really happy, it was not so simple because my last memory of the rain was Assen. At the beginning I was a little bit scared and didn't want to crash. We were lucky to have the extended qualifying time to get used to the track. Little by little I got confidence and finally I felt really good with the bike and the grip of the track, especially under braking. It doesn't matter if it’s wet or dry tomorrow, it’s not my problem to think about it, I have to ride in whatever conditions we have. A wet race would be better for the championship though!”

Marquez was cautious with his approach to the wet conditions but remains positive ahead of tomorrow’s race knowing that he has to finish ahead of Lorenzo to seal his first MotoGP World Championship title. He said, “Today was a different kind of qualifying session, like those from the past with a lot of track time, as we had an hour and fifteen minutes. It is the first time that I've ridden here in MotoGP at Motegi and in addition it was wet and I didn't have time to set the bike up, but nevertheless I think we had a good session. We achieved our aim of a spot on the front row. Tomorrow's race is forecast to be dry, and it will be interesting as nobody has had time to find a good setup.” 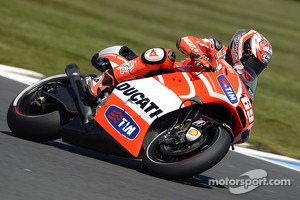 “We know our GP13 works well in the wet, and it’s nice to be on the front row here in Japan. If I’m honest, I’m a bit disappointed because at times in the session I was very fast and really had good feeling; I thought even pole position was a possibility, but in the last part of the session, the other guys really stepped it up, and as the track dried out, I wasn’t able to improve. Maybe I should’ve put on a new front tyre for the last exit, but it’s nice to be able to smile, and the important thing is to try to take advantage of the front row in the race. We know it’s going to be much more difficult if it’s dry, but I’ll try to get a good start and put up a fight for as long as I can. Thanks to the team for being pros and continuing to give me their best.”
shares
comments
Previous article