Jorge Lorenzo has explained the logic of his attempt to return to MotoGP action this weekend in Malaysia instead of waiting until the final round of the 2018 season at Valencia.

Ducati rider Lorenzo will attempt to take part in the Malaysian Grand Prix in Sepang, two weeks on from having to withdraw from the Japanese GP with lingering pain from his Thailand crash.

Since then the Spanish rider has undergone surgery on his fractured left wrist and reported on Thursday that he felt “a bit more strong and more powerful” in comparison to Motegi after being declared fit by circuit doctors.

He added he expects his return to be “difficult” – but emphasised the need to get back to racing as soon as possible in order to prepare for what will be his final race as a Ducati rider at Valencia before he switches over to Honda in 2019.

“Firstly, I want to go back to the bike because it has been a long time, a lot of weeks that I haven’t ridden, and for sure you lose practice, you lose skills, everything,” Lorenzo said.

“It’s not only about the fractures and the injuries, but the general physical condition.

“Even if this time I think I will not be able to [do] something big, at least I can get used to the bike again and this will help for my last chance to make a good result with Ducati in Valencia.

“Let’s see tomorrow, I don’t want to forecast any result of performance. I’m not [feeling] perfect but let’s see how I feel on the bike.”

Lorenzo also denied his prime aim is to be fully recovered in time for his first ride on the Honda in post-race testing at Valencia.

“The most important thing for me is to arrive to the hotel tonight and to practice tomorrow and the afternoon,” he said. “It’s always [about] the present, the next target.

“I am a Ducati rider, and I think about Ducati. When I finish the season, I will think about my next stint, my next challenge. But [for now] just thinking Ducati.

“I try to be here, try to get some rhythm to try again the bike, make long my [time] riding compared to Japan – and if it’s possible to be competitive, even better.

“You never know, it can rain, it can be easier for the injury. We are here, depending on the injury we’ll see what I can do.”

Should Lorenzo be again forced to withdraw mid-weekend, Ducati tester Michele Pirro is on standby to replace him, as Australia substitute Alvaro Bautista returns to the Angel Nieto team.

Pirro was unavailable for the Phillip Island race last weekend as he was performing development work with Ducati’s GP19 machine at Valencia. 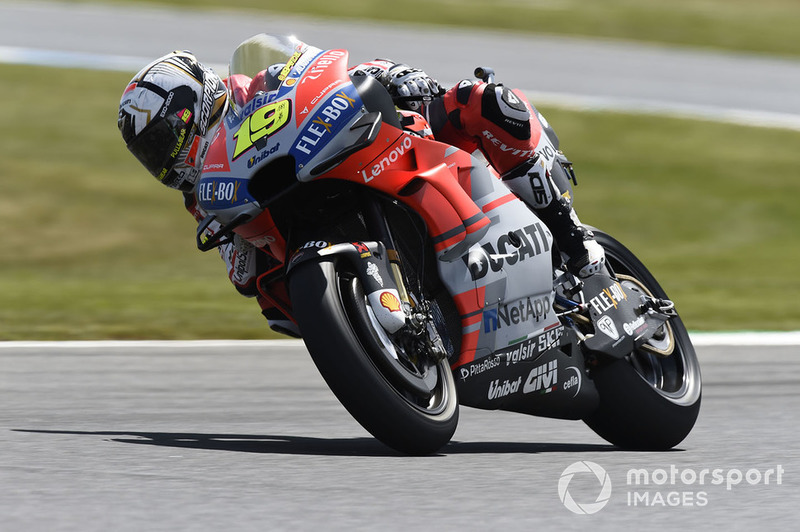