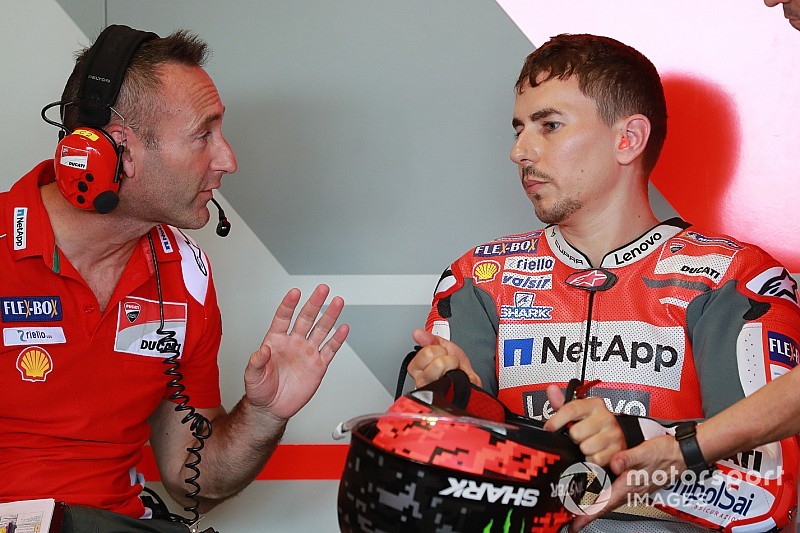 Jorge Lorenzo has been passed fit to take part in MotoGP's Japanese Grand Prix, but the Spaniard is still unsure whether he will race as he hasn't yet fully recovered from injury.

The Ducati rider has suffered injuries in both of the past two MotoGP weekends, first contusions to his right ankle and left wrist, which he then fractured in a practice crash in Thailand.

Lorenzo ended up missing the Buriram race and said his participation for Motegi depended on his rate of recovery and, a day before track action begins, Lorenzo feels he hasn't improved enough.

"I am very disappointed because I knew the fracture exist after the scan but I thought after 13-14 days the injury will improve and I will feel much better here," he said.

"Honestly I don't feel much better, actually feel more or less the same.

"In the first days I feel some improvement, that is why I start to swim and make even some exercises but when I slightly force the wrist, I feel quite a big pain after some hours.

"The wrist is quite inflammed, the feeling is not good, the pain is quite big, [when] making some movement."

Lorenzo will ride in the opening practice session, but he doesn't expect to enjoy his time on the bike and is also wary of worsening his condition with two more races coming up in the next two weekends.

"I don't expect to feel very good on the bike tomorrow but anyway I'm gonna try to ride because you never know," he added.

"It's complicated because this type of injury without operation needs lot of days to recovery and now we have to race three in a row so situation is difficult.

"For sure [it can get worse], also I know is not gonna change so much in just 8-9 days in Phillip Island. For Malaysia I think will be quite a bit better, not for Phillip Island and for sure not for tomorrow.

"What worries me is not the pain because I race many times in even more pain conditions, what worries me is I didn't get operation and the bone can go out of the place if I force, especially in this brake of hard braking [areas]."

Lorenzo added that Ducati made some changes so his violent highside crash in Thailand, a result of a mechanical problem, will not happen again.

"I think they understand what happened and will make some new things for this, will not happen again."