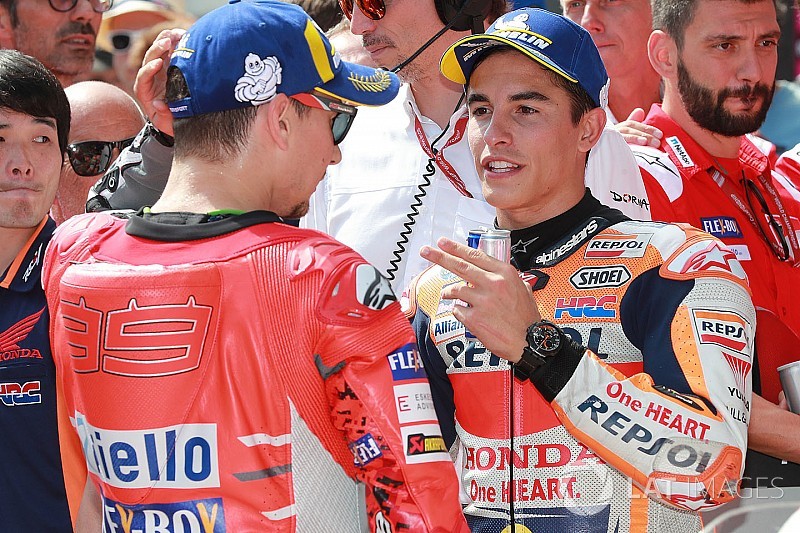 As their back-and-forth battle for top honours in the Austrian Grand Prix entered the final lap, Lorenzo dashed past Marquez on the main straight – but couldn't shake off the championship leader.

And having already pulled off a move on the brakes at the sharp Turn 3 right-hander the lap before, Marquez was close enough to attempt another pass, diving down the inside and planting his Honda on the racing line to block his rival.

However, Lorenzo kept his Ducati on the outside line and, just as he looked to have ceded position, he accelerated back ahead of Marquez – and would keep the lead until the chequered flag.

“I was stronger in some areas of the track, especially in the uphill [on the main straight] in fifth gear, but he was very strong in the second corner [Turn 3] in this braking so he always overtook me,” Lorenzo said.

“But in the last lap he didn't expect myself by the outside, on the acceleration, so was a little bit [of a] surprise for him.

“And then when I overtook him, I pushed on the limit, risking so much on the braking, but I did it and I finished this unbelievable victory, one of my best in MotoGP.”

Marquez controlled the opening stretch of the race after passing Lorenzo early on, with the Ducati rider dropping as far back as a second as he worked to keep teammate Andrea Dovizioso behind.

“I didn't expect Marc so quick at the beginning, he really wanted to push to open the gap, so I needed to push but at the same time save a little bit the tyres and the benzene [fuel],” Lorenzo said.

“And then 10 laps to the end I decided to attack, but Marc was there, was always there, and I knew he wanted to try.”

Marquez explained that his ultimately unsuccessful attempt at a breakaway was motivated by him using the hard rear tyre, as opposed to Lorenzo's soft and Dovizioso's medium.

“I start from the beginning [to] push hard because I had the rear hard tyre, to open a gap – in one moment I thought I was able,” he recalled.

“But then they [the Ducatis] start to catch me because like I expected, when the tyre drops,  the difference is on the straight.

However, Marquez insisted he was not disheartened by the defeat, as he'd extended his championship lead to 59 points over Valentino Rossi, who finished only sixth.

“This race I enjoyed," he said. "Second position but I gave everything. I tried [to win], was not possible but we increased the advantage in the championship, [I'm] very happy.”