Lorenzo in talks with Honda to replace Pedrosa 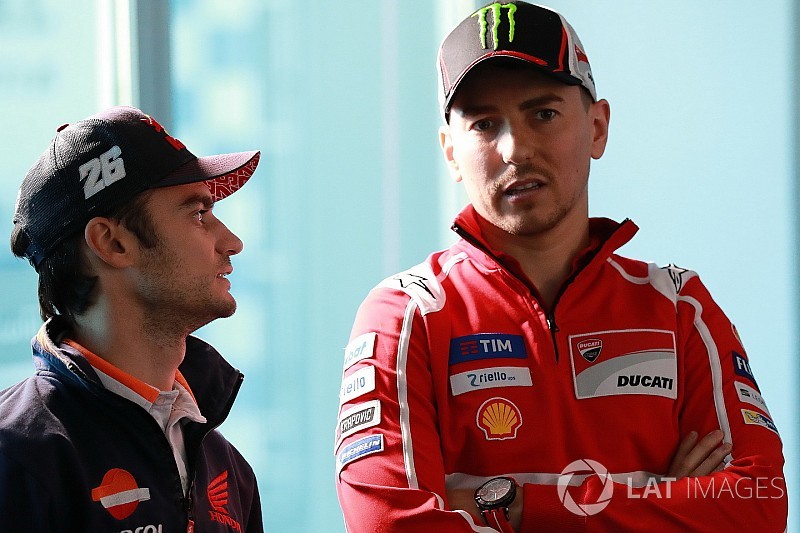 The Repsol Honda outfit has begun talks with three-time MotoGP world champion Jorge Lorenzo as a potential replacement for the outgoing Dani Pedrosa for 2019, Motorsport.com has learned.

Honda announced on Tuesday that it would part ways with Pedrosa, who has raced for the Repsol-backed factory outfit since 2006, “by mutual consent” at the end of the current campaign.

It has subsequently emerged that Honda is keen on placing Lorenzo alongside reigning champion Marc Marquez for 2019 – and that it has already held preliminary talks with the 31-year-old.

Lorenzo, who won MotoGP titles with Yamaha in 2010, 2012 and 2015, had struggled since joining Ducati last year, but took a breakthrough maiden win in dominant style last weekend at Mugello.

Shortly after his victory, he told Spanish media: “"My story with Ducati is over.

“A part of me is sad because I know that with this bike I could have fought to be world champion, which is why I came here. Now it’s too late. There is nothing to be done.”

When it became clear he could leave Ducati at the end of his current contract, Lorenzo emerged as a prime target for Suzuki – but the Hamamatsu marque has since elected to pursue Moto2 ace Joan Mir instead.

Consequently, Lorenzo has been working on a return to the Yamaha fold with what is believed to be a Petronas-backed satellite ride alongside current Marc VDS Honda rookie Franco Morbidelli.

This remains an option for Lorenzo – but should the Spaniard elect to join forces with Honda, it would be logical that Pedrosa could end up on the satellite Yamaha instead.

In a separate statement following the announcement of his Honda departure, Pedrosa said further information on his future would be disclosed at MotoGP's next race weekend in Barcelona.

Honda signing Lorenzo would make for a star-studded line-up for its works outfit, with the manufacturer having announced a new two-year contract for four-time champion and current championship leader Marquez earlier this year.

Asked about the identity of his next teammate during his Formula 1 test outing in Austria, Marquez – who has only raced alongside Pedrosa since joining MotoGP – said: “It's something that Honda is discussing about it, trying to find the best teammate.

“At the moment I don't have the last news but I know that they were speaking with many many riders, as you know, as [previously] with [Johann] Zarco, [Andrea] Dovizioso.

“I think they will announce soon something. But I don't know, that's something that Honda needs to answer, I cannot say nothing.”

Honda confirms Pedrosa to leave at the end of 2018