The MotoGP contingent had to weather extreme conditions at Sepang, with the Malaysian skies allowing some of the sport's underdogs to steal the limelight.

Considering Lorenzo's season so far, the three-time champion was pretty bullish about his chances after banking a front row start in the wet conditions. But conditions got a whole lot wetter on Sunday and Lorenzo lacked the confidence to stay with the leading pack for more than a few laps. He admits he got "lucky" in scoring the podium, and he clearly did - but he deserves credit for what was a correct approach in the circumstances. 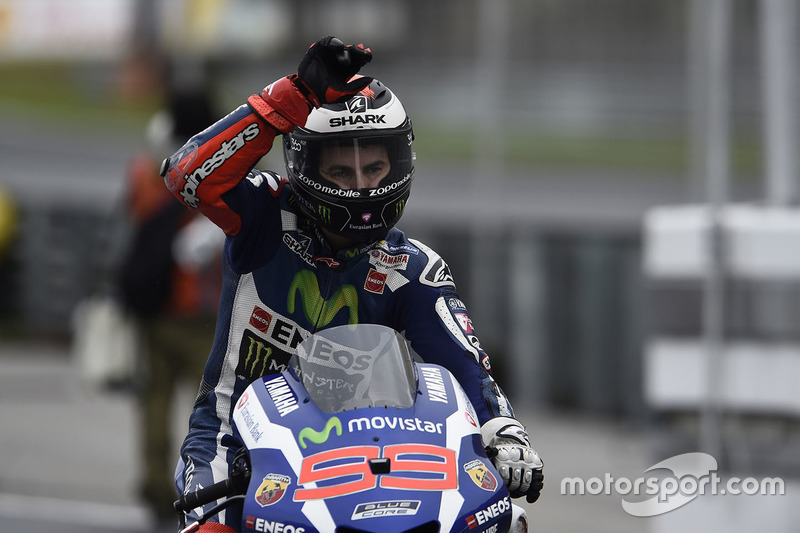 Two races on from exiting the title fight, Rossi produced another superb weekend - but his best efforts are still not enough to end Yamaha's losing streak. Closest of all to a super-fast Dovizioso in qualifying, Rossi actually looked like winning the race for half the distance, but as the track dried out and a front tyre issue reared its head, it became no longer possible. After running wide at the hairpin and allowing Dovi through, he correctly settled for second. 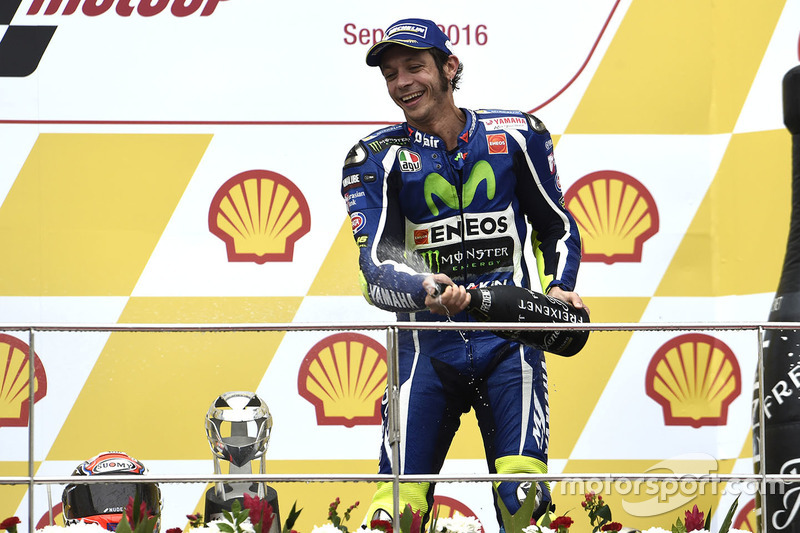 By his own admission, it’s a good thing Marquez already had his third world title wrapped up, as the tiniest of errors left the Spaniard on the floor for the second time in two weeks. Unlike at Phillip Island, however, Marquez’s RC213V was in good enough for condition to continue – and after remounting in 15th place, he had worked his way up to 11th by the time the chequered flag flew. 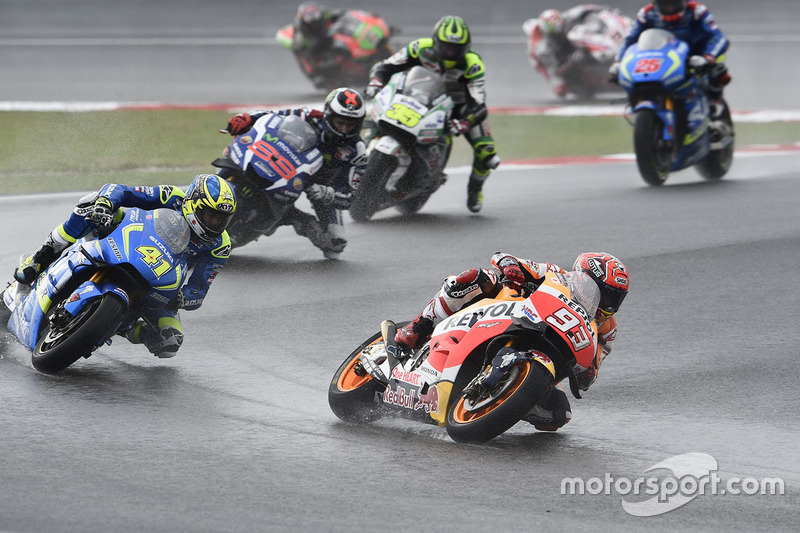 With Nicky Hayden busy on World Superbike duty in Qatar, Honda was left with little option but to call back Aoyama to stand in for the absent Dani Pedrosa in Malaysia despite the Japanese rider’s wholly underwhelming showing on home soil at Motegi. Not helped by the weather, Aoyama had an even harder time in Sepang, as the ex-250cc champion failed to contribute to the team’s points tally. 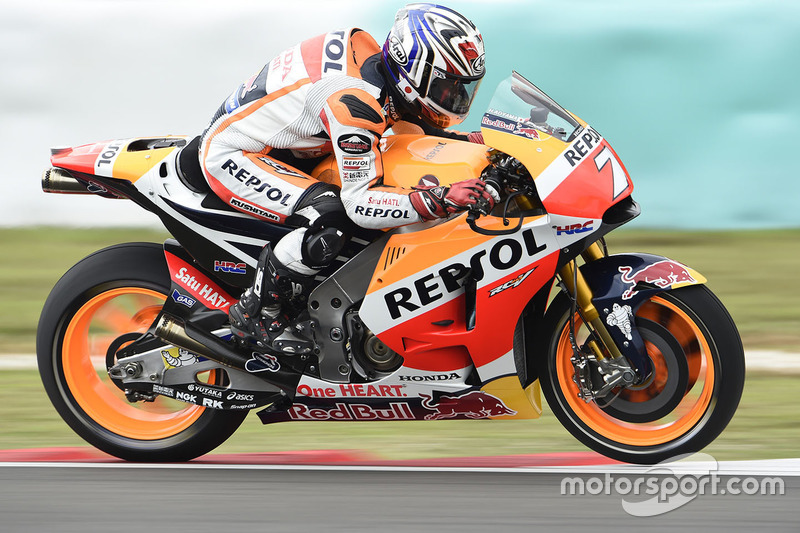 Whether you believe Crutchlow, who says Dovi was "cruising" in the early stages of the race, or the Italian himself, who says he was genuinely "scared" about a minor bike problem, there's no denying this was an absolute masterclass from the Ducati man. It was fairly clear from the very start of Q2 that he would be the rider to beat in the conditions, and he executed the race perfectly. 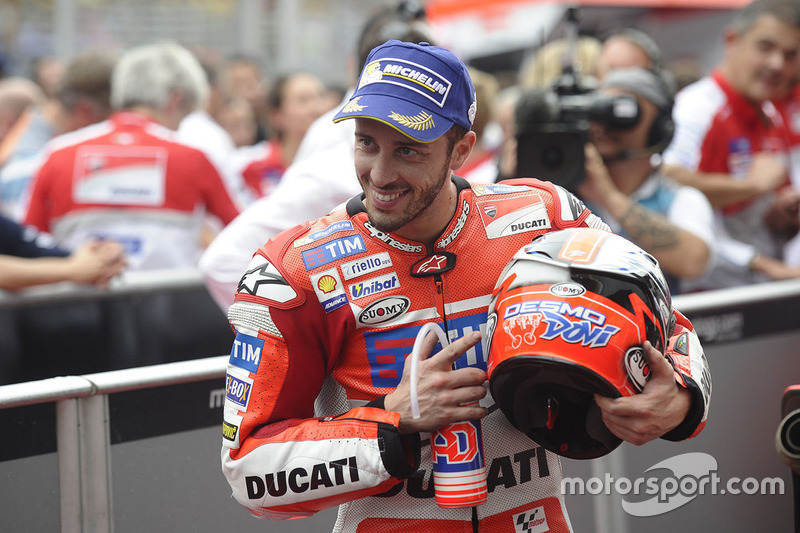 It's fair to ask some questions of Iannone's approach as he again threw his bike down the road on Sunday while set for a great result, even if he was seemingly unaware that Marquez and Crutchlow had gone down right behind him. But the Maniac deserves some to be cut some slack on this one - for somebody just back from a painful injury, he was seriously quick, and his battle with Rossi probably helped teammate Dovizioso ease past the Yamaha in the end. 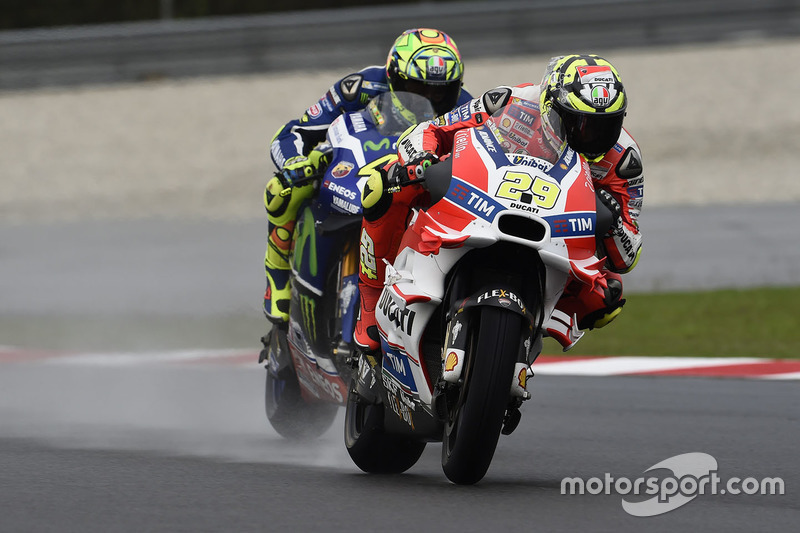 After a pretty average stint on the works Ducati, Barbera was back to his best on his first outing back in the familiar confines of the Avintia squad. After he was shaded by teammate Baz in qualifying, the pair’s race-long battle took on extra significance as other riders ahead fell by the wayside, and in the end it was the Spaniard who came out on top to bank his best-ever MotoGP finish in fourth place. 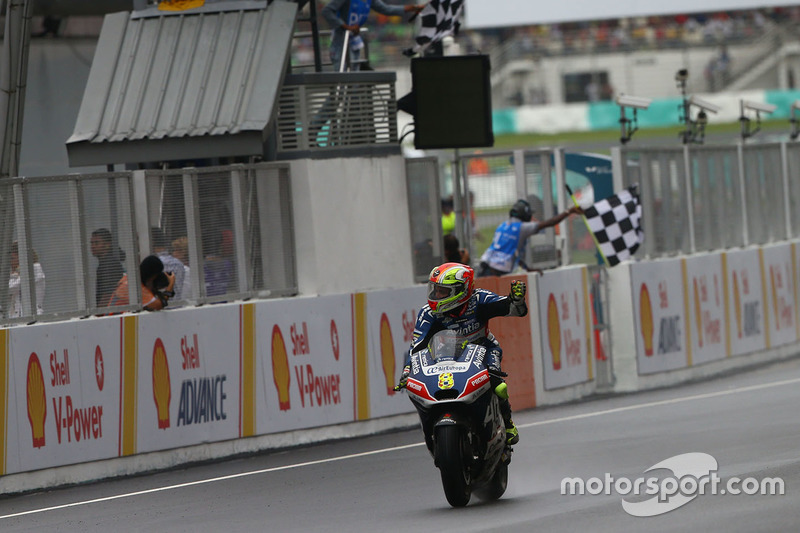 Never one to pass up the opportunity to shine in the wet, Baz beat several more fancied runners to a Q2 berth and then proceeded to get his best-ever grid slot of 10th. Had the measure of Barbera for most of the distance, but slipped behind with four laps to go – and just kept the Suzuki of Vinales at bay in the closing laps to cap off an incredible weekend for Avintia. 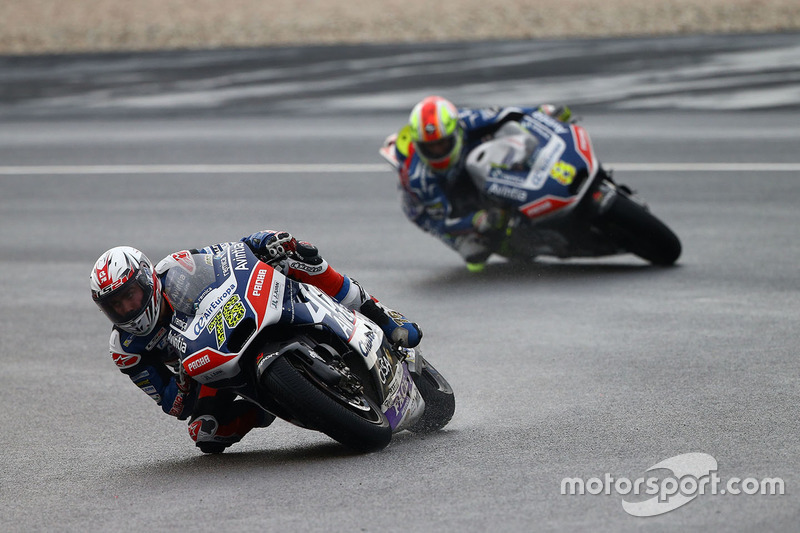 Sepang marked the 15th consecutive race that Vinales finished in the points, the Yamaha-bound Spaniard continuing to show an ability to reliably bank results that you wouldn't usually associate with a sophomore rider. Despite showing promise in practice, Vinales didn't look to have great pace on Saturday and Sunday, but a sixth-place finish for the rain-averse Suzuki bike is a solid enough outcome. 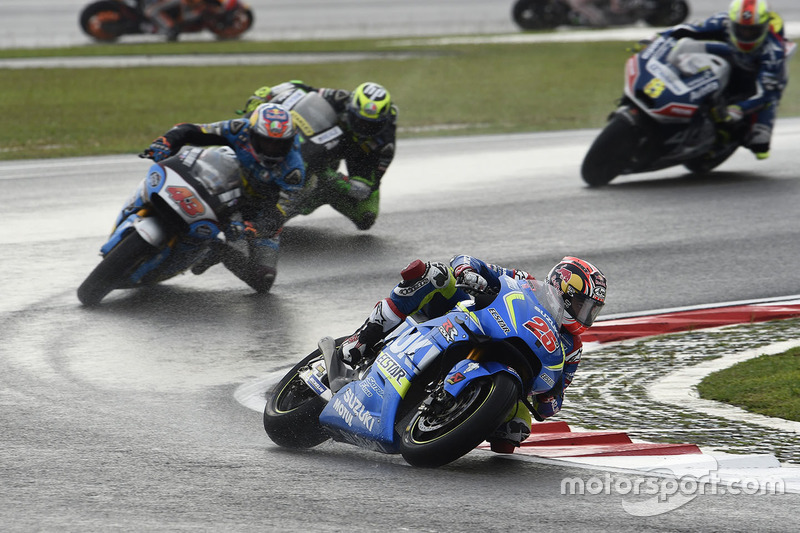 Espargaro outqualified his teammate Vinales for a third race in a row, only to be beaten over a grand prix distance for the 13th race in a row. Gambling on the soft tyre, he looked competitive early on, but made a very costly mistake by running wide and allowing a ton of bikes through. He couldn't make much progress from there, and any semblance of pace was basically gone by the final laps. 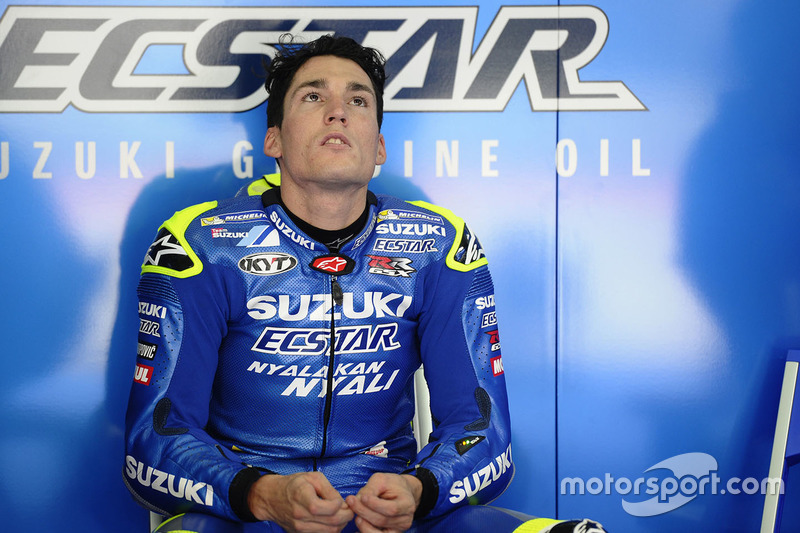 The LCR Honda rider’s miraculous recent run of results had to come to an end sooner or later, and with crashes in FP3, qualifying and the race, Crutchlow’s weekend was reminiscent of some of his wilder outings earlier in the year. Still, the Brit heroically took a battered bike to fifth on the grid after his Q2 crash and was on course for another top-five finish before losing the rear at Turn 2 in the race. 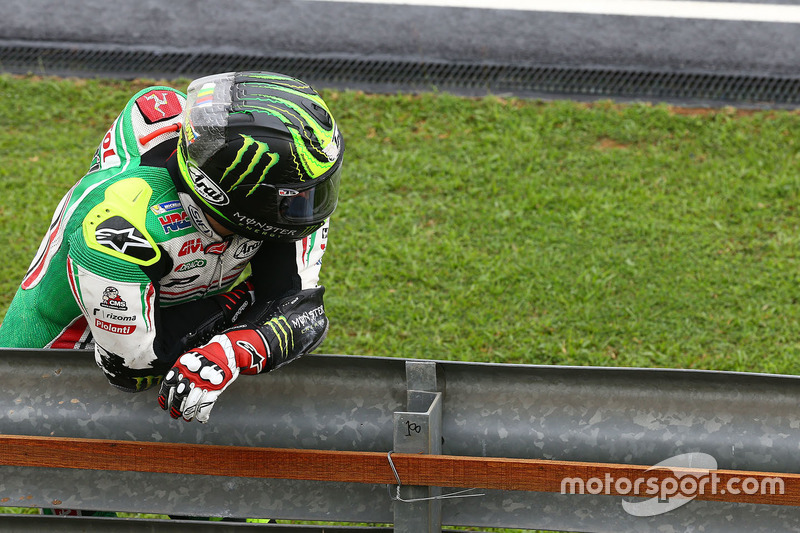 With Crutchlow and Marquez hitting the deck, it was left to Marc VDS rider Miller to fly the flag for Honda in the constructors’ stakes, and the Australian took advantage of the attrition ahead to score his best finish since the summer break with P8. Lost out on a Q2 spot by the slimmest of margins, but hung on gamely ahead of Pol Espargaro and Petrucci in the race to bank eight critical points. 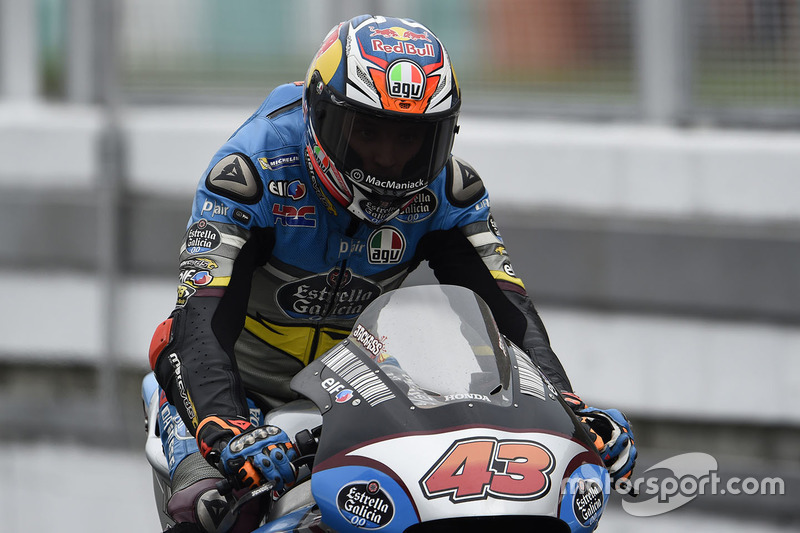 Another race and another solid enough result from the Tech 3 rider, even if he generally didn't seem to get along with the conditions. The French team is, in all likelihood, heading for its first podium-less season since 2007, but Espargaro continues to provide some stability in terms of points amid a tough campaign. 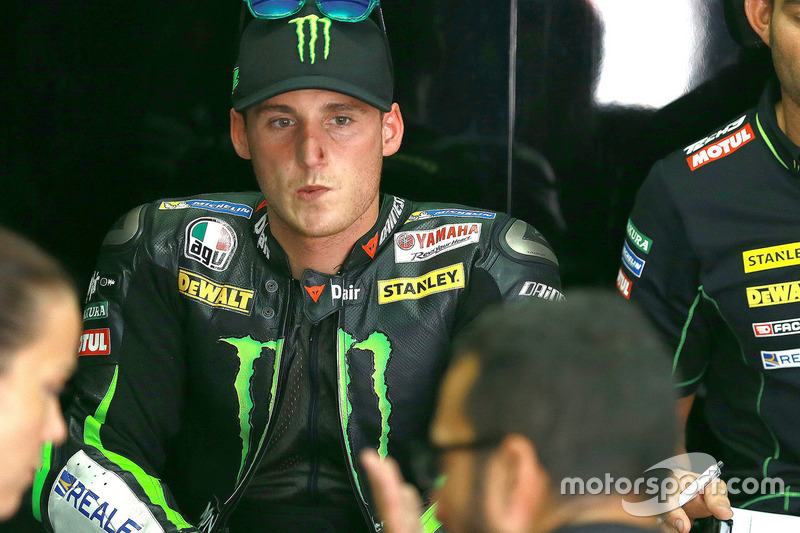 Smith only just missed out on a Q2 spot on Saturday, and generally looked in good shape for the race after a supremely encouraging showing at Phillip Island. However, the Briton, still recovering from his knee injury, could not get the tyre to work for him in the extreme conditions of the race, and ended up finishing a rather lonely 14th, 11 seconds adrift of his teammate. 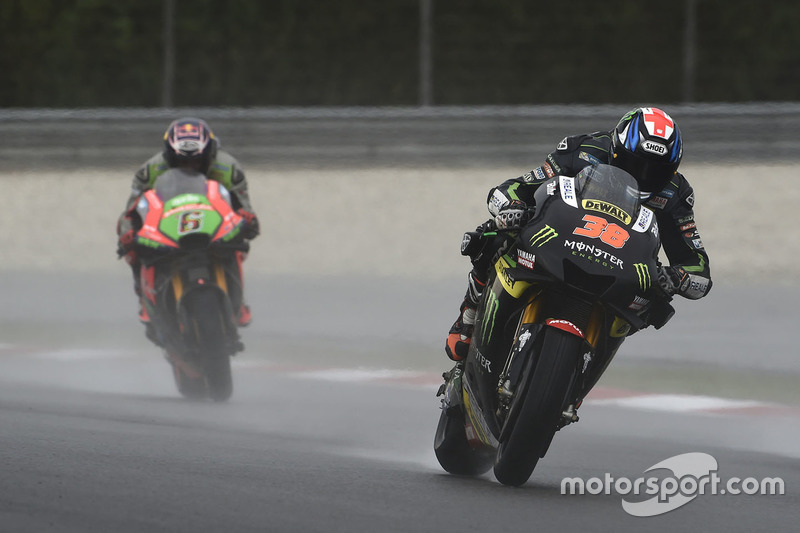 Looked competitive enough in the dry, but it came as a shock to see Redding – a rider who often is at his best when the weather takes a turn for the worst – struggle to make any kind of impression in a wet qualifying and race. Seven tenths adrift of Petrucci in qualifying, the British rider struggled with a chronic lack of rear grip and ended up 15 seconds down on the Italian in the race. 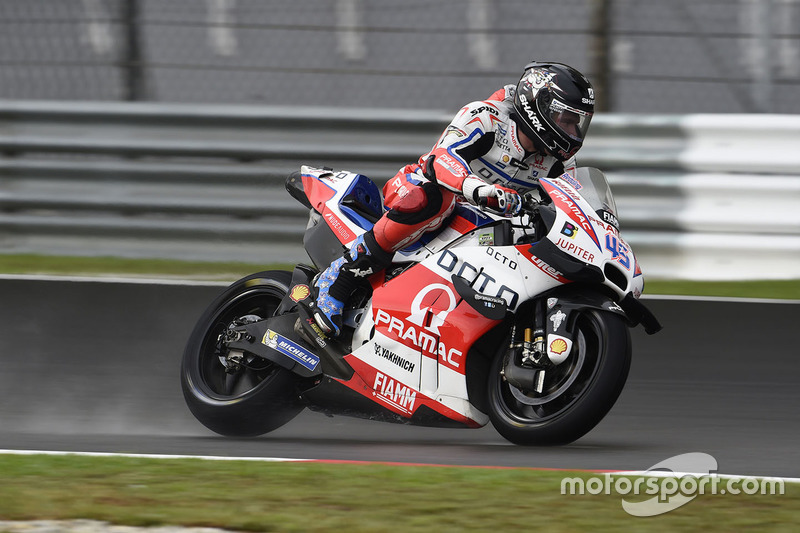 Aragon antics aside, Petrucci has staked a very strong claim to the GP17 next year by grinding out a fifth top-10 result in the last seven races and leaving Redding in his wake. Struggling with visibility, a belt-and-braces approach paid dividends in the end as others ahead crashed and Petrux steadily climbed from 15th to 10th, only just behind Miller and Pol Espargaro. 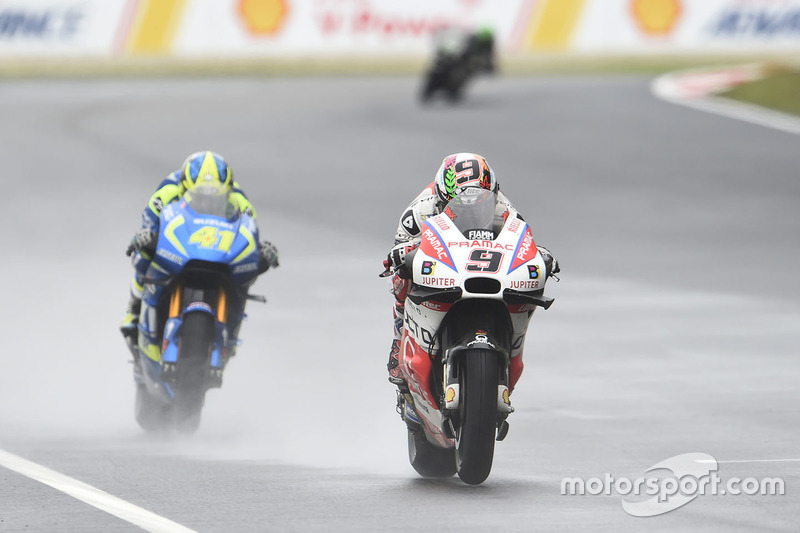 Bagnaia gets Aspar MotoGP test after winning bet with team

Mir “not worried” by winless start to MotoGP title defence

Mir “not worried” by winless start to MotoGP title defence