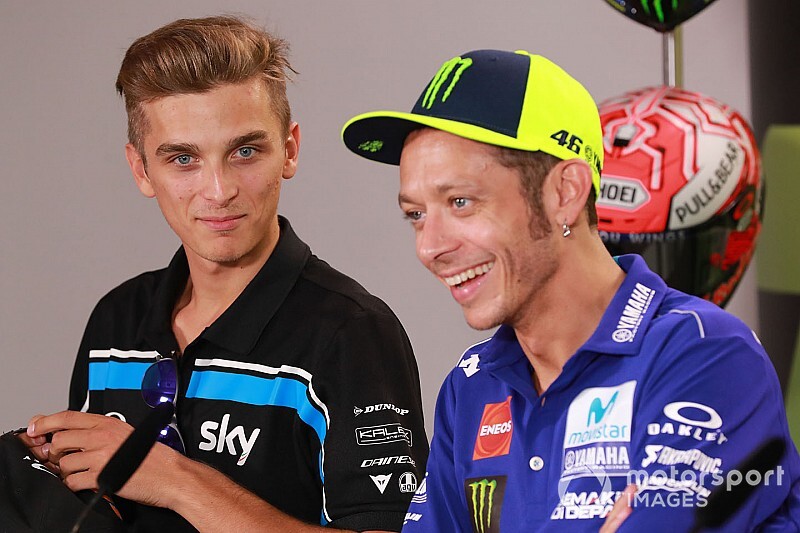 Teaming up with Valentino Rossi in MotoGP in 2021 “seems impossible” to his half-brother, Moto2 rider Luca Marini, despite Rossi’s exit from the factory Yamaha team.

Retirement is a possibility for the 40-year-old, but Yamaha has also made it clear that a factory-spec M1 bike would be made available to Rossi for 2021 if he wishes to continue in the premier class of grand prix racing.

Although Rossi’s Sky VR46 team – which currently employs Marini in Moto2 and has helped him to three wins in the two past seasons – has been repeatedly tipped for a MotoGP future, Rossi’s 2021 works-spec M1 would almost certainly be run by the Petronas SRT operation instead.

And while Marini is chasing a premier-class promotion after having established himself as a frontrunning Moto2 rider, he struggles to imagine a scenario where he’d replace fellow Rossi protege Franco Morbidelli at the Petronas team to ride alongside the MotoGP legend.

“Everyone is telling me this, but it seems impossible,” Marini said when queried about the prospect of a MotoGP team-up with Rossi.

“There's Franco Morbidelli, who is making an impact MotoGP. Maybe he is just a little bit overshadowed by Quartararo's performance, but in my opinion a [2019] season like his has been more than positive, and this year you will see that he will be even stronger.”

Marini, who will begin his fifth Moto2 campaign in 2020, played down his chances of securing any MotoGP ride for 2021, but said the example of Alex Marquez – who had an intermediate-class contract in place for this year before receiving the Honda MotoGP call-up to replace Jorge Lorenzo – suggested anything was possible.

“If we see the reality of the situation, for MotoGP it is almost all over now,” Marini acknowledged.

“In the first races [of 2020] the other [2021] contracts will be finalised, so there will be few places left, also because there has been a generational change. There are few veterans left in MotoGP.

“I have to stay focused on this season and try to get some good results, because at the end of the year there will always be a few gaps left, as we saw for example with Alex Marquez, who won the world championship and had the opportunity to go to the official Honda team.

“So you never know, but you have to finish well here in Moto2 first.”

Five MotoGP riders who need a big year in 2020

Has Ducati made another MotoGP tech breakthrough?