Marc Marquez said he "slow-cooked" his 11th victory of the MotoGP season at Phillip Island after he closely followed Maverick Vinales for a long time before passing him on the last lap. 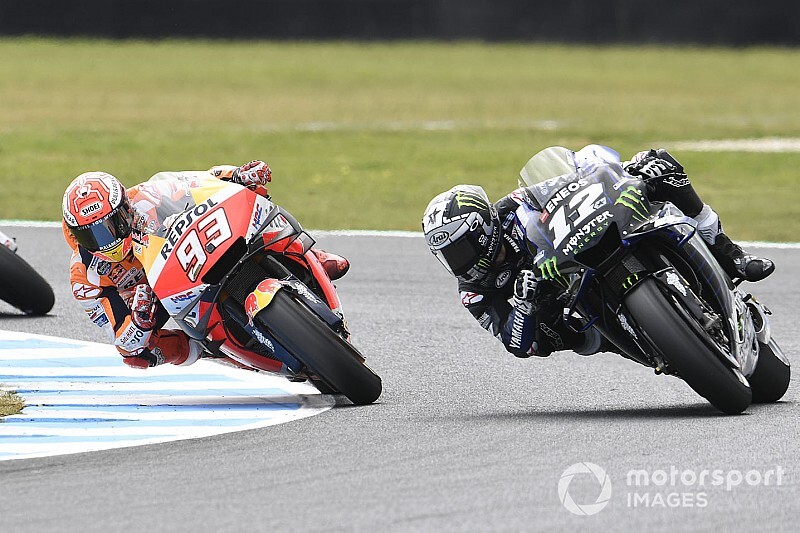 Following some early battles, Vinales and Marquez pulled in front on lap 10 of 27 in Australia, and rapidly pulled away from the rest of the field.

Despite topping qualifying, warm-up and three of four practices, Vinales was unable to shake Marquez off, but the Honda rider waited for the last lap to make his move.

He slipstreamed past the Yamaha on the main straight and held off Vinales before the latter crashed out at Lukey Heights in his bid to retake the lead.

Marquez said that by running behind Vinales for so long, he "slow-cooked" the victory.

"I knew before the race there were crucial five-six laps, and that five, six laps he pushed really hard, he did 29 low, was my qualifying practice time," said the six-time premier-class champion.

"Then I started to slow cook, to cook the victory, try to analyse, check how was the tyres and even like this was not 100 percent sure because he was very, very fast, and both of us were finished with the tyres.

"But I say, ‘ok, I will try to overtake him in the straight because there is where I have a small advantage’, but all the sector two and three he was incredibly fast.

"His bike was always on the line and I was just sliding more, but able to survive that two sectors, and sectors one and four I was faster than him."

The race played out similarly to those at Misano and Buriram, where Marquez stayed behind Fabio Quartararo and won both races with late overtakes.

In order to stay with Vinales when the Yamaha rider took the lead on lap 10, Marquez pulled off a very aggressive move on fellow Honda rider Cal Crutchlow at Lukey Heights, which caused the LCR rider's glove to nearly fall off.

Marquez later apologised to Crutchlow for the move, which the Briton said he had no problem with

"I already said sorry to him," said Marquez. "It was tight, on the limit, but was the crucial moment because if in that lap I didn’t overtake Cal and Maverick opened up half a second, the race was finished.

"So it’s what I did, I just pushed in the limit and I overtake Cal because my target was Maverick."