MotoGP points leader Marc Marquez believes that Alvaro Bautista's recent setbacks in World Superbike are the "perfect example" of why he can't think his 2019 title is already sealed. 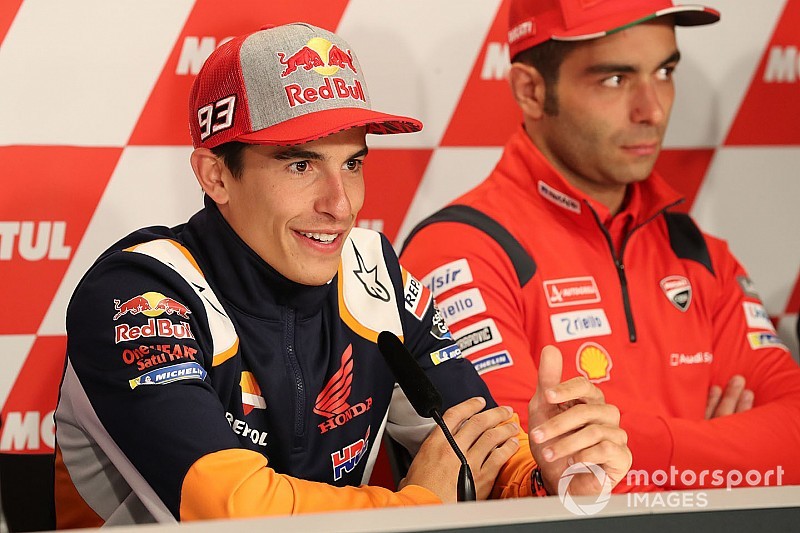 Bautista had a dominant start to his maiden WSBK campaign, winning the first 11 races of the season on his Ducati.

But the Spaniard threw away two likely race wins with crashes in the two latest rounds of the campaign, and is now only 16 points ahead of nearest rival Jonathan Rea.

Marquez, the champion of the last three MotoGP seasons who leads the current standings by 37 points, reckons that Bautista's case shows that his own campaign can quickly turn for the worse with a couple of crashes.

"Last weekend, with Bautista, I had the perfect example of what can happen," said Marquez. "It seemed that he already had the championship done and there were bets about when he was going to get the title.

"He made one mistake at Jerez and another at Misano and now he's 16 points behind the second [Jonathan Rea].

"At the moment we did a good test in Montmelo, we have a few things we need to try in a different layout like can be Assen.

"Then we will have two important races that is Assen and Germany before the summer break."

With Marquez having won at Assen last year and gone unbeaten at the Sachsenring since 2010, the Honda rider admitted that things have to go very wrong for him to give up his championship lead before the summer break.

"Very badly I have to do things so [I am] not leading in the holidays," he added. "But the goal is not to lead the summer but with more advantage than I have now.

"Facing the championship with a race [worth of points] advantage gives you peace of mind that allows you to work in another way."