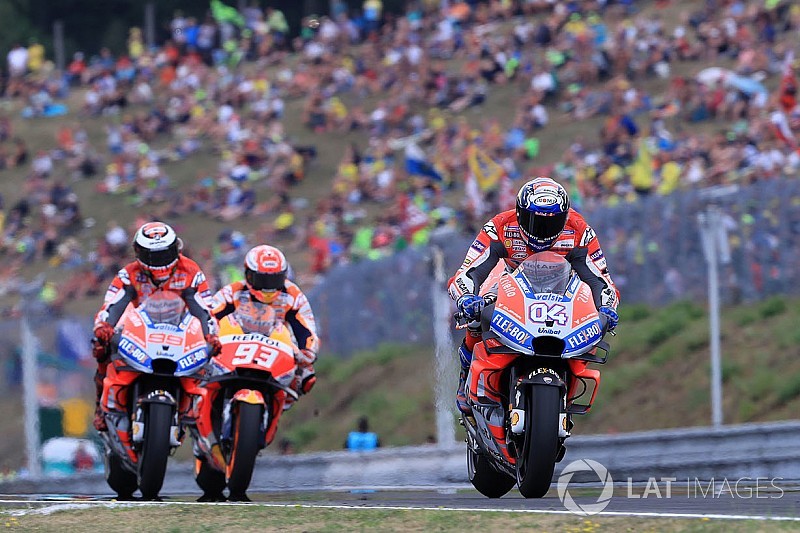 Marc Marquez said he preferred to miss out on winning MotoGP's Czech Grand Prix rather than try something "crazy" against the Ducati rivals Andrea Dovizioso and Jorge Lorenzo.

Marquez was in victory contention all throughout the race but ended up finishing third, behind the factory Ducatis of Dovizioso and Lorenzo.

The Honda rider was battling with Lorenzo until the end of the race, and only lost out on second position on the last lap.

Despite taking his worst result of the season barring retirements, Marquez was satisfied with his bike's performance.

He admitted that it was difficult to fight with the Ducatis, which had superior acceleration and top speed around the Brno circuit, and said he didn't want to risk a "crazy" move as a result.

"During the race, I feel quite good, I feel strong with the bike, the speed was good, I was able to ride well to save the tyres," Marquez said.

"It was so difficult to overtake them, but I say 'ok, I will try but don't be crazy'."

He added: "The problem is on the right side [of the tyre] I suffer a little bit in those conditions, and I had a few warnings during the race, and I say 'there is no need to push anymore'.

Despite finishing third, Marquez still increased his points lead from 46 to 49, as he finished two positions ahead of closest rival Valentino Rossi, and feels this was more important than beating the Ducatis.

"The good thing is that Valentino was already behind, so my main target was to try to increase the advantage in the championship," he said.

"We did, we know Andrea and Jorge gained some points, but they are still 68 points behind me. So we are on the way.

"I'm happy because this is a circuit I normally struggle a little bit every year, and we finish so close from the victory. So this is the more important.

"We are leading the championship by 49 points, 68 with Dovi, and the target is this. If I feel strong, there will be circuits that I will be very, very strong."