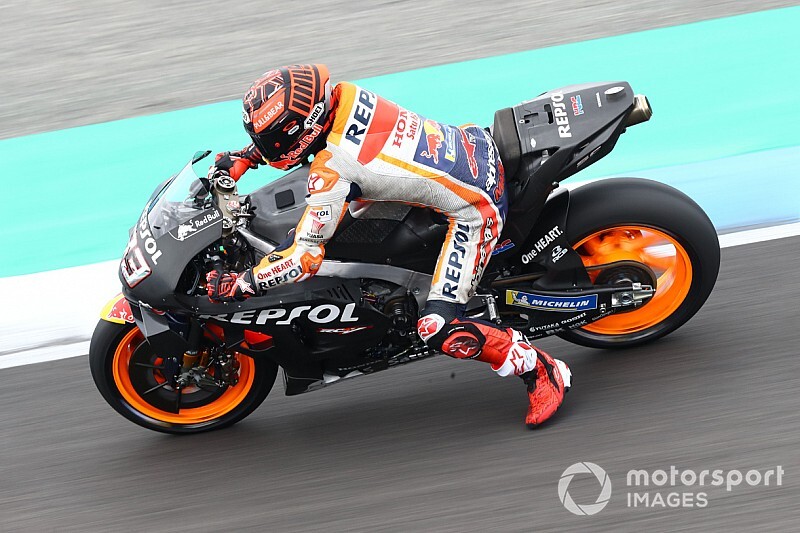 Marc Marquez says a damp patch caused his crash early in Monday’s MotoGP test at Jerez and led to a partial dislocation of his right shoulder.

Marquez sat top of the session early on Monday after his initial run on his 2019-spec Honda, but he quickly switched to his ’20-spec RC213V.

In the morning, the track had several damp patches dotted around it off line, and Marquez touched one of these after running wide on the way into the Lorenzo hairpin at the end of the lap. Though the crash was slow speed, he landed awkwardly on his shoulder and had to be taken to the medical centre for checks.

Explaining the crash, Marquez said: “Was my mistake, but I went wide and in Turn 5, Turn 9 and Turn 13 that out of the line [there] is kind of wet patches, especially in the morning.

“I went wide, I was not so fast because I just gave up [the lap] and just I [touch] that wet part and I lost the front. But the problem was I arrived in the gravel in not a good position and I had the subluxation of the shoulder, and for that reason I went to the medical centre.”

Marquez’s 2018 season was plagued by a recurring dislocation problem in his left shoulder, which required complicated surgery in the off-season.

The world champion also crashed on the opening day of last week’s Valencia test while on his ’20 bike, though this was a result of the new engine not being fully set-up with the bike’s electronics.

In Valencia Marquez and LCR counterpart Cal Crutchlow both had a ’20 RC213V to try, but HRC gave the Briton’s to Marquez to try various new things.

The biggest difference between both ’20 bikes Marquez had was the chassis, and he says this test programme was decided by HRC as a result of Tuesday’s poor forecast.

“I had three bikes in the garage,” he added. “One is the current bike, one is the first step of the new engine and a different chassis.

“Here in the moment, this first day - because tomorrow the weather looks like it’s not perfect - HRC decided that I [was to] try the two different bikes this first day. Second day I don’t know what the plan is. But this plan was created by the weather.”