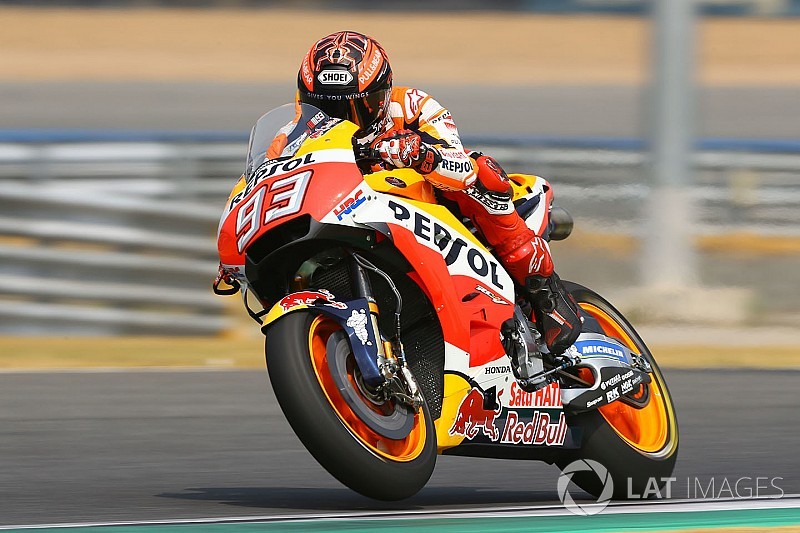 Reigning MotoGP champion Marc Marquez made a late surge to the head of the times on the second day of testing in Thailand, beating factory Honda teammate Dani Pedrosa.

It was Pedrosa who sat atop the order for the bulk of the day, the Spaniard having set a 1m30.127s with a little over four hours remaining of Saturday's running to knock Marquez off the top spot.

The times remained static for some time after that as temperatures soared at the Buriram track, before numerous riders made improvements in the final hour.

Pramac Ducati rider Jack Miller leapt up to second with just under half an hour to go with a 1m30.185s, before Marquez became the first rider to breach the 90-second barrier some 10 minutes later with a 1m29.969s.

That was enough for Marquez, who had earlier trialled a new aerodynamic fairing on his Honda, to beat Pedrosa by 0.158s, with Miller a further 0.058s back in third.

Yamaha's Maverick Vinales had languished outside the top 10 for much of the afternoon before a late effort of 1m30.347s put him fourth, less than a tenth up on Tech 3 rider Johann Zarco.

Danilo Petrucci made it two Pramac bikes in the top six just seven thousandths further back.

Suzuki riders Alex Rins and Andrea Iannone sampled two new types of fairing on their GSX-RRs, both also suffering crashes during the day.

Valentino Rossi failed to improve in the latter stages and ended up 14th on the second of the factory Yamahas, 0.919s off the pace of Marquez.

In his second day of MotoGP action, Tech 3's Hafiz Syahrin was 2.029s off the pace, and eclipsed Avintia Ducati rider Xavier Simeon to avoid finishing at the bottom of the pile for a second day in a row.