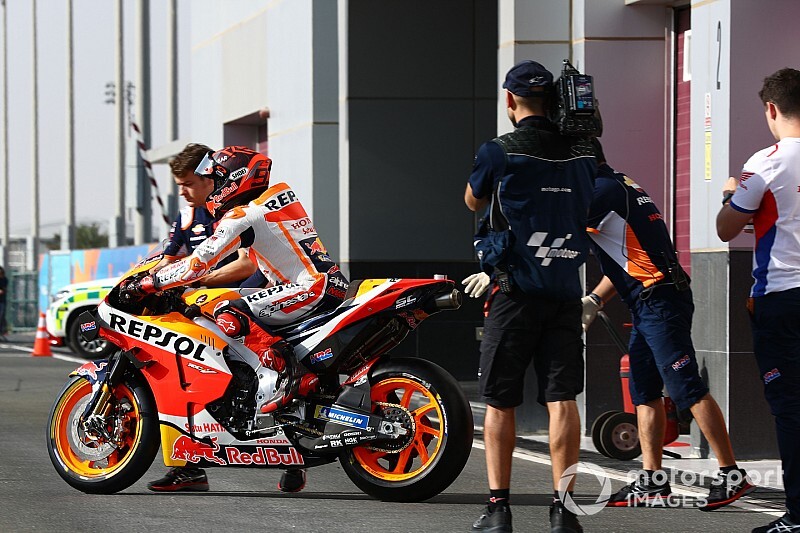 MotoGP champion Marc Marquez says he is "of course worried" about Honda's performance in the pre-season test in Qatar ahead of the 2020 season opener at the same venue.

The Losail International Circuit has never been a Marquez stronghold, but even though he hasn't won there since 2014, he has finished in the top five in every Qatar race since.

After LCR rider Cal Crutchlow said on Saturday that he was having to ride the newest RC213V like an "amateur" in Qatar, all three of the works-spec bikes finished behind 10th-placed Takaaki Nakagami on the 2019 Honda in Monday's running.

When asked whether he was concerned by what he was seeing in Qatar, Marquez admitted it was a sharp contrast to the previous pre-season test at Sepang.

"Of course I'm worried because I would like to be very fast every lap, every racetrack," Marquez said. "But it's true that that in this racetrack we are worried.

"We have some kind of problems that we're trying to analyse where they from, because all Honda riders - especially with the new bike - we are struggling a lot in the same point.

"You see that for example Crutchlow, he's a fast rider here, but he's struggling a lot, he [also] crashed. We are pushing, but we just try to analyse because we know where is the problem but we cannot fix at the moment. So, yeah, step by step we will try.

"But yeah, on the other hand, in Malaysia we were quite fast, we were consistent, we were riding good. So, yeah, we have day and night [difference], it's true, but the positive thing is that this circuit is the most special one in the calendar."

Marquez has previously indicated that the 2020 Honda has retained the same vices as its predecessor, with the front end remaining a major concern.

He said Honda was still trying to identify and implement a fix in time for Qatar, but added: "The [rest of the] season will be I think different, but the first GP normally we struggle a lot, and we need to have everything in the correct positions if we want to find a good result."

While Crutchlow's crash at Turn 2 had left him with a right forearm hematoma and made it uncertain he'll take part in the final day of running, Marquez escaped injury in his own spill at Turn 8, despite his Honda ending up demolished.

The reigning champion said his continued recovery from off-season shoulder surgery was a key reason for the crash.

"In that point I changed direction in another way, and especially when I'm tired, I just push a lot with legs because I cannot do with the shoulders," he said.

"And yes, just I pushed too much with the legs, I lost the front, and with the shoulder I wasn't able to come back. But apart from that, just lucky for us we are okay."