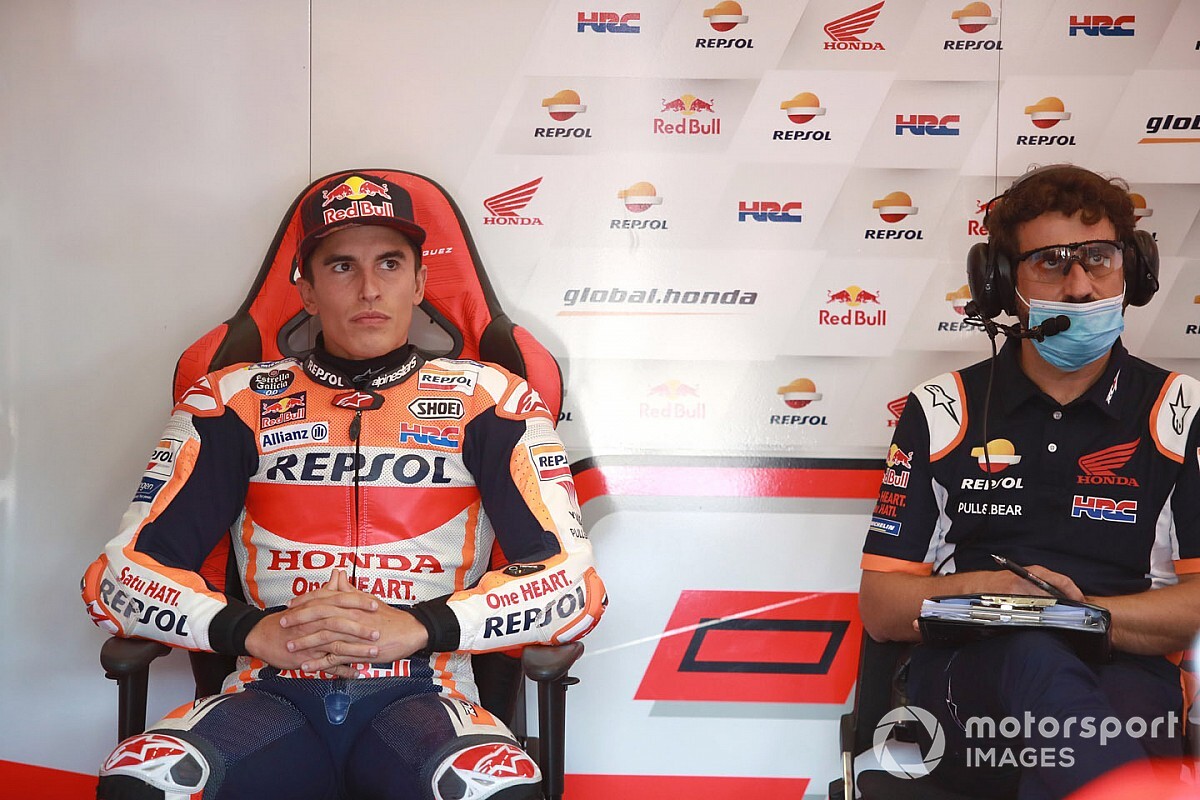 Honda MotoGP boss Alberto Puig says Marc Marquez broke the plate in his right arm “trying to open a window” at home, which led to a second operation on Monday.

The reigning world champion broke his right arm in a heavy crash during the Spanish Grand Prix last month, which required surgery to have a titanium plate fitted to the fractured humerous bone.

Marquez attempted to come back at the following week’s Andalusian GP, but had to abandon this after qualifying owing to swelling in his arm causing him strength issues.

Set to return for this weekend’s Czech GP, he was forced into another operation on Monday to have the plate replaced after it broke – ruling him out of the Brno race.

Speaking to the media at Brno on Thursday, Puig revealed Marquez’s second injury was a result of a “domestic accident”, though the stress he put on his arm trying to return weakened the plate.

He also admits had the doctors informed Honda that Marquez could have damaged the plate, he wouldn’t have been “given the chance” to ride in the second Jerez race.

“As you know last Monday Marc had another surgery on the humerus due to the crash at Jerez in the grand prix,” Puig said.

“It was a domestic accident this time because he was trying to open a window and he suddenly felt a lot of pain and later we could see that the plate was broken.

“This is caused after all the stress that he had in the arm, but as you know we went to Jerez with conviction that we could do it.

“The doctors were ok [for him] to do it and they never informed us that the plate could have broken.

“If we had this info, probably he wouldn’t have gone to Jerez, Honda will not have given him the chance to ride.

“But the positive point is that this happened in his house, not at Brno on the bike, or in Austria, which could have had massive consequences in case he had another crash.

“From now on we will have to continue to check the development of his fracture and only time will tell when he’s ready to go back racing.”

Puig refutes the comments that Marquez took too many risks trying to come back for the Andalusian GP, stating: “Racing is a dangerous sport and this thing didn’t happen at Jerez, it happened at his house.

“So, if you look at it this way, no. But it’s true that when you have surgery and you stress some of the injured parts, clearly it’s more stressful than if you do nothing.

“But if you’re a sportsman, they pay you to perform. So that’s what he tried.”

Marquez is currently 50 points adrift of Petronas SRT’s Fabio Quartararo in the standings, with the Honda rider’s absence from the Czech GP all but ending his title aspirations.

Puig notes that the task of winning a seventh MotoGP title is now “more difficult” for Marquez, but didn’t completely rule it.

“You can never say never, it’s never over but it’s more difficult.

“But now other guys have an open window, guys who maybe didn’t have any chances have some chances now.

“But if you check it mathematically, it’s more difficult but it’s like this. Sometimes you win, sometimes you lose.