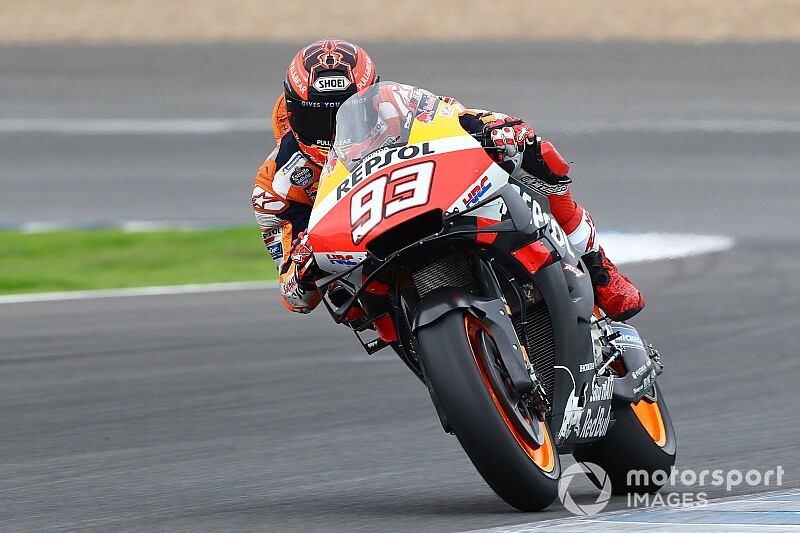 Marc Marquez topped the final testing timesheets of 2019 in a day where inclement weather meant running at Jerez was extremely limited.

Following a 30-minute delay to the start of proceedings, Avintia’s Tito Rabat emerged from his garage to be first on track, with Petronas SRT’s Fabio Quartararo following the Ducati rider not long after.

Quartararo continued his evaluation of Yamaha’s 2020 engine on Tuesday and was fastest of the handful of runners after the first hour with a 1m39.342s.

This was beaten almost immediately as the second hour began by Marquez, who guided his ’19-spec Honda to a 1m37.820s to end up an eventual 0.017 seconds clear of Suzuki’s Alex Rins.

The track fell silent around 45 minutes after Marquez went to the top of the times as a fine rain began to fall around the circuit.

This soon intensified, leading to over an hour without any track action - and it would ensure Marquez’s laptime would remain the benchmark.

Marquez aggravated a previously partially dislocated right shoulder in a crash on Monday, and will now spend the winter recovering from an operation due to take place on Wednesday in Barcelona.

Several riders, including the rookie crop of Iker Lecuona (Tech3), KTM’s Brad Binder and Alex Marquez (Honda) used the opportunity to gain some experience of riding a MotoGP bike in the wet.

Quartararo, teammate Franco Morbidelli and works Yamaha riders Valentino Rossi and Monday pace-setter Maverick Vinales also ventured out onto the damp surface to gather some data of the new M1 engine in the wet.

With conditions failing to improve, the entire field had packed up as the session entered its final hour.

Marquez completed just 14 laps and very few on the ’20 prototype, while Rins led Suzuki teammate Joan Mir to round out the top three.

Vinales was fourth-quickest ahead of Quartararo, while Andrea Dovizioso was top Ducati runner in sixth, having managed just five laps on the Desmosedici.

For the second day straight, Alex Marquez finished up as top rookie in 17th, beating 20th-placed Lecuona by six tenths, while Binder was 22nd ahead of Avintia Academy rider Eric Granado.