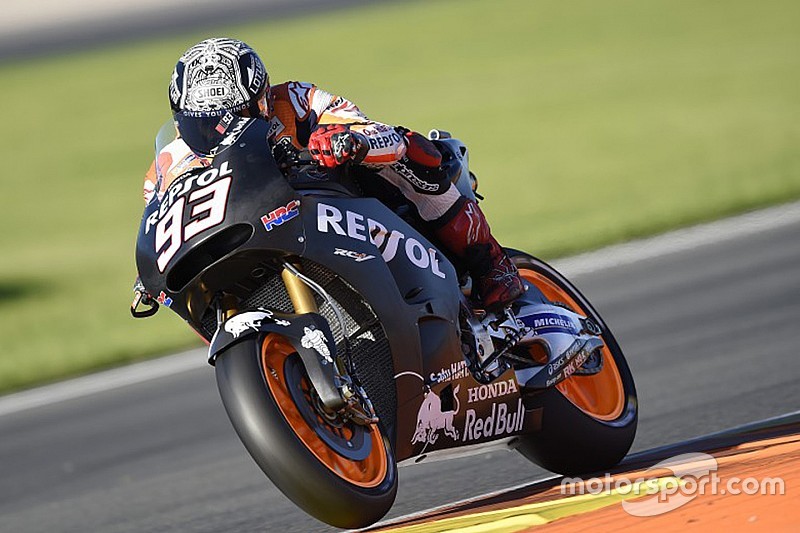 Marc Marquez set the pace on the first day of official 2016 testing at Valencia, as a number of riders crashed trying to get to grips with next year's Michelin rubber.

Marquez was the first rider of all to crash, losing the front-end of his Honda RC213V towards the end of the first hour on only his fourth tour of the Ricardo Tormo circuit at Turn 3.

On his previous lap, Marquez hit the top of the timesheets on a 1m32.077s, which was bettered by fellow Honda riders Cal Crutchlow and Dani Pedrosa in the second hour.

Marquez then improved to a 1m31.551s in the third hour, which would remain the benchmark for the remainder of the session as the Spaniard then began to circulate using the 2016-spec Honda machine.

During the fourth hour, Ducati rider Andrea Iannone jumped up to second place, just 0.088s shy of Marquez, but crashed at Turn 3 with just 20 minutes of the seven-hour session remaining.

Pedrosa finished third, 0.180s off the pace of his Repsol Honda teammate Marquez, ahead of an impressive Maverick Vinales aboard the Suzuki.

Newly crowned champion Jorge Lorenzo was the best of the Yamaha contingent in fifth place, just over three tenths off Marquez's pace.

Valentino Rossi ended up 12th fastest, setting a best time of 1m32.401s in the final hour to move within a second of Marquez's pace aboard the 2016 Yamaha M1.

Esteve Rabat meanwhile made his second MotoGP test appearance for Marc VDS Honda, following on from his earlier outing at Aragon in September.

The former Moto2 champion was another rider to suffer a crash during the session, joining a long list that also included Crutchlow, Vinales, both Espargaro brothers, Aprilia riders Alvaro Bautista and Stefan Bradl and Aspar Ducati's Eugene Laverty.

Schwantz: “Rossi was in trouble even without grid penalty”

Analysis: Why 4WD is on Formula 1's agenda