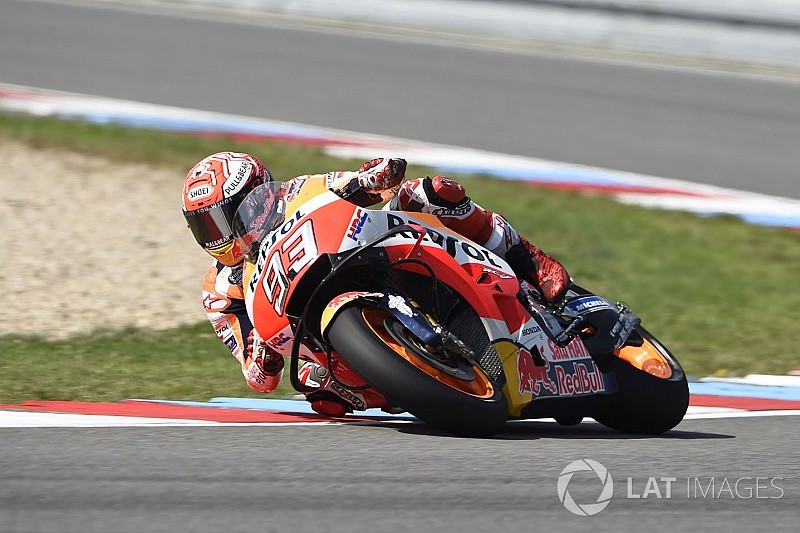 The majority of the eight-hour test was led by one of the two factory Ducati riders, with Jorge Lorenzo setting the early benchmark of 1m55.609s.

The Spaniard stayed ahead for the first two hours before Sunday winner Andrea Dovizioso took over, going 0.092s quicker.

Dovizioso remained fastest for nearly three hours when Marquez finally edged ahead, only to then be demoted by his teammate Dani Pedrosa with little less than two hours on the clock.

However, Marquez fought back with 38 minutes to go to end up topping the test with a time of 1m55.209s.

Pedrosa was also edged out by Johann Zarco late in the session, and had to settle for third.

The Ducatis of Dovizioso, focusing on chassis comparison, and Lorenzo eventually ended up fourth and fifth respectively.

Rossi was the sole factory Yamaha rider in the test as Maverick Vinales decided to rest after complaining of shoulder pain from his crash in Sunday's race.

Pramac Ducati's Danilo Petrucci was eighth as the top 10 was completed by Alex Rins, who worked on electronics in the morning and his afternoon plans included testing a chassis for 2019, and Hafizh Syahrin.

Rins' teammate Andrea Iannone had a shortened day after he crashed and took 11th ahead of Aleix Espargaro, who tested a carbon swingarm and was another rider to fall. The sole KTM of Bradley Smith was 13th.

Suzuki tester Sylvain Guintoli, running with two broken ribs, completed the day in 19th as Hiroshi Aoyama, who replaced the injured Stefan Bradl as Honda's test rider, rounded out the order in 20th, 4.1s off the pace.

The Angel Nieto and Avintia Ducati teams did not take part in the test.